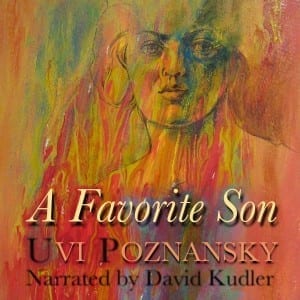 This story is a present-day twist on the biblical story of Jacob and his mother Rebecca plotting together against the elderly father Isaac, who is lying on his deathbed, in order to get their hands on the inheritance, and on the power in the family. This is no old fairy tale. Its power is here and now, in each one of us.
Listening to Yankle telling his take on events, we understand the bitter rivalry between him and his brother. We become intimately engaged with every detail of the plot, and every shade of emotion in these flawed, yet fascinating characters. He yearns to become his father’s favorite son, seeing only one way open to him, to get that which he wants: deceit.

“What if my father would touch me,” asks Yankle. In planning his deception, it is not love for his father, nor respect for his age that drives his hesitation—rather, it is the fear to be found out.

And so—covering his arm with the hide of a kid, pretending to be that which he is not—he is now ready for the last moment he is going to have with his father.

What was your inspiration for this book?
When I read the biblial story, the characters presented themselves before me. But beware: when reading my story, do not seek clear distinction between heroes and villains: no one is wholly sacred, because–like Yankle, the main character here–we are all made of lights and shadows, and most of all, doubt.

This is a seminal moment in the story: Isaac, the blind father is on his deathbed. He seems to suspect he is being fooled. Meanwhile Yankle, the son, is torn between his love for his father and an irresistible urge to deceive him, in order to get that which does not rightly belong to him: the last blessing. He stands before his father, arm covered with a goatskin sleeve (so it may feel like his hairy brother’s arm) not knowing where to go from here. Will he cheat his dying father, or won’t he?

Here is an excerpt:
Without even looking at the entrance to the tent, without even touching the cold surface of the hourglass, I know: It is nearly empty. The sand is running out. For us, there is no more time. He will never realize who it was standing there by his bedside, overcome and awash with tears.
I let one word escape, hoping that he cannot catch the sound of it—but wishing, in spite of myself, that he would:
“Dad,” I whisper.
It is then that he raises his hand and with a strength I did not know he possessed, takes hold of my limb. He runs his fingers through the hair of the goatskin sleeve, comes as high up as my heart—and then, loses his breath and lets go. “The arm is the arm of Esav,” he whispers. “But the voice is the voice of Yankle.” When you wrote the book did you know you were going to offer it as an audio book?
No, this decision came later…

Why did you decide to produce an audio book?
When your book is picked up for a major movie deal, this success–incredible as it may be–usually comes with a caveat: your work will be used by the screen writers merely as a suggestion, so it remains to be seen how much of the original text is retained in the final cut… However, when your book is picked up for narration, every sentence, every turn-of-a-phrase, every breath and pause in the original text is not only retained, but comes to life in the voice of the narrator.

So let me rephrase the question as follows: which actors would you choose to play your characters in a narrated rendition? Ah! What a great question! I would choose an actor with a great literary skill, one that can interpret the layers of meanings in my story, and one that has versatile voices in him. In short: David Kudler, and I had my heart set on him the moment I heard his audition.

David has been a voice and stage actor, a writer, and a book editor for over twenty years. Since 1999, he has been in charge of publications for the Joseph Campbell Foundation. As you can see, he is a man for all seasons… As a narrator, he has a warm, versatile voice, and a great ear for character and dialect. For A Favorite Son, he plays Yankle, Esav (Yankle’s brother), Isaac (Yankle’s father), Becky (Yankle’s mother) and Eliezer (Becky’s butler.) For each one of these characters, there is a distinct voice!

How did you choose the reader for the book and the production company?
After the production was complete I was so elated that I wrote this for my narrator, David Kudler:

Springing out of my mind, out of this cage
His words but a whisper, right here on this page
Jacob trembles in shame–not because of his sin
But because he wears nothing but a sleeve of goatskin

Lonely and naked, how can he rejoice
Wishing to be wrapped by the warmth of voice
While back in the camp, Eliezer the butler
Croaks out of the throat of the Great Kuddler

Oh please, trust me now, this is no spelling mistake
For his voice can cuddle–but it can also shake
Yes, Kuddler lets you hear the subtle clipclop
Of a camel approaching, Becky perched at the top

And so at long last, by hook and by crook
Jacob speaks loud and clear in this audiobook

What else would you like to share with readers about your audio book?
Here is Yankle’s description of the last moments he has with Becky, his mother, which they spend plotting how to deceive Isaac, his father.

“By and by, a perfect calm comes upon me. I have no thought in my head, no clue that this is to be the last sunrise, the last morning that I spend with my mother; no premonition that our time together is running out, and that I should kiss her, and hug her, and bid her farewell.
Yet for some reason, glancing around me, I commit to memory every aspect of this scene, every detail: The vivid pattern of the rug, spread across the dirt floor. The embroidered silk pillows, leaning against the woven headrest. The little blemish, barely visible in the corner of the blanket. The silver thread coming apart, at one point, at the bottom of the canvas. The jug of water, half hidden behind the curved leg of the bed…
This hour is so intimate; so sweet, and it is fast coming to its bitter conclusion.
And the only thing that disturbs me, the only thing that stands here between us, is not being able to look each other in the eyes, during the last moments that remain to us.”