You are here: Home / Children and Young Adult Books / A Fateful Melody by Megan Rivers 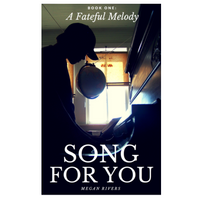 Dreading a life with her estranged father in Australia, fifteen year old Christie Kelly finds herself seated next to the young, sultry voice of world-renowned rock star, Galvin Kismet on the transpacific flight. In this time of uncertainty and distress, a friendship quickly blossoms as they share their anxieties about what is waiting for them in Australia.

As Christie navigates through a strange world of homesickness with her father and step-family, she never once thought she’d find Galvin back in her life again. But when things get worse in Melbourne, fate steps in with a friend.

What Inspired You to Write Your Book?
The idea came to me when I was fifteen, sitting at LAX with my best friend. We thought we saw a celebrity walk by and my friend had said, "What if he was on your flight?" As I boarded the plane and flew back home, a story started forming in my head. Since then it has morphed into something completely different, but it always started on that hot July day in Los Angeles.

How Did You Come up With Your Characters?
Christie came to me… I didn't have to make her up. As I wrote the story she just walked into my mind, sat down, and said, "I'm here!" She wasn't a hard character to write. Galvin, on the other hand, was much more complicated. I had to do plenty of writing exercises in order to reveal his character. He has many complex layers. Meadow, by far, was my favorite character to write; she is a toned down version of my own sister. At times Meadow would spontaneously show up in my writing, or with dialogue and I hadn't planned it, but I would reread it and shrug my shoulders realizing it worked.

Book Sample
Now, I don’t remember his exact words but he stuttered and jammed four sentences into one, sounding something like, “Oh, uh… do-do you nee—are you alright? Can I—here take this.” I was too absorbed in my own self pity to notice the person who was sitting next to me. He anxiously handed me a small package of very stiff tissues, which were no longer white in color, from his bag.

Embarrassed, I thanked him and did my best to make him believe that I was all right while dabbing my eyes. “Good, I thought you were upset because I sat down next to you!” he replied in playful exasperation. That was his attempt at making a joke, but my mind wasn’t registering the meaning of the words coming out of his mouth, it was too busy trying to put two and two together.

“Your voice.” It was like a match had lit and set fire to my sluggish senses. “You’re Alvin, aren’t you?”

His brow creased and then he chuckled. “I’m Galvin, Galvin Kismet.” He held out his hand to shake mine.

If it wasn’t for the fact that he was shaking my hand, my whole body would have gone limp in the shock that comes with meeting someone you idolize. He looked at me, expecting me to say something back and my brain seized up. I pried my eyes from his and looked up at the luggage carrier across the aisle, searching every nook and cranny of my brain trying to remember my name.

Christmas Kenny? Crispy Kitty? Oh, what was my name? Not only was I sitting next to the most amazing voice in the world, but its vessel was there too. “Christie Kelly,” it came to me suddenly and I let out a sigh of relief, “nice to meet you.”

“Well Christie Kelly, it looks as if you’re stuck with me for the next twenty-some hours,” he said, putting his hands behind his head with a smug look plastered onto his face.

And that was how we officially met.

Buy A Fateful Melody On Amazon