You are here: Home / Fiction / A Divide Beyond Reason by Roger Emile Stouff 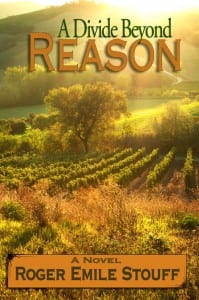 As boys they were inseparable, brothers born of different mothers and fathers. Over the course of their lives together they were drawn into a heinous crime and the path of a terrifying Indian loner; climbed into the mountains in search of courage; confronted treachery on their very doorsteps; loved and mourned, and faced death in the wilds.
Now they are old men; one among them stands against the theft of his home by corrupt politicians and an avaricious developer. The second stands with the villainous. And the last must choose between the law he took an oath to uphold and a lifetime of friendship.
So begins a journey across three lives, forever entwined no matter how divided. How they came to this place in time, a shotgun and a chasm of regret between them, will determine how it all ends.

What Advice Would You Give Aspiring Writers?
It’s not easy but keep trying!

Roger Emile Stouff is the son of Nicholas Leonard Stouff Jr., last chief of the Chitimacha Tribe of Louisiana, and Lydia Marie Gaudet Stouff, daughter of a Cajun farmer. He has been a journalist for more than thirty years and writer of the award-winning column “From the Other Side” in the St. Mary and Franklin Banner-Tribune. He was featured on the television show “Fly Fishing America” in 2006, and was writer and narrator of the documentary “Native Waters: A Chitimacha Recollection” on Louisiana Public Broadcasting in 2010. Based on his two memoirs, “Native Waters” and “The Great Sadness,” the show is now showing on public broadcasting stations nationwide, was nominated for an Emmy and was recipient of a Bronze Telly Award.

He writes extensively about his Native American ancestry in autobiography, fiction and short stories, including the connection the Chitimacha, “people of the many waters” hold to the ancestral waters of the Atchafalaya Basin.

With co-author Kenneth Brown he has also authored science-fiction and epic fantasy novels, including the first two books of the series “The Allidian Saga.”

What Inspired You to Write Your Book?
As a journalist I grew interested in the rampant abuse of eminent domain law. I started thinking about the incredible emotional and psychological toll of having a home taken from a person. I wondered, what if someone took a stand against a seizure? And what if those involved on both sides of the situation were friends? What began as a story of eminent domain became a story of how close-knit people grow up differently, follow different paths and encounter different successes as well as pitfalls.