You are here: Home / Bargains and Freebies / Bargain Books Under $3 / A Corpse in the Soup by Morgan St. James and Phyllice Bradner @MorganStJames

Identical twin sisters, over-the-hill flower child from Alaska, Goldie Silver and popular syndicated advice to the lovelorn columnist, Godiva Olivia DuBois, a wealthy Beverly Hills widow, take the reader on a zany romp through the glitzy world of TV chefs. Filled with twists and turns, clues and backfires, these ladies with a nose for trouble set out to track down the real killer when a murder occurs at the glitzy televised Gourmet Gladiator Tournament and Godiva’s boyfriend is a prime suspect, . To complicate matters, they get lots of unwanted help from their 80 year old mother and uncle, both former vaudeville magicians who love to dress in disguise and go undercover. Will the Silver family be able to flush out the real killer or will they all wind up in really hot water? 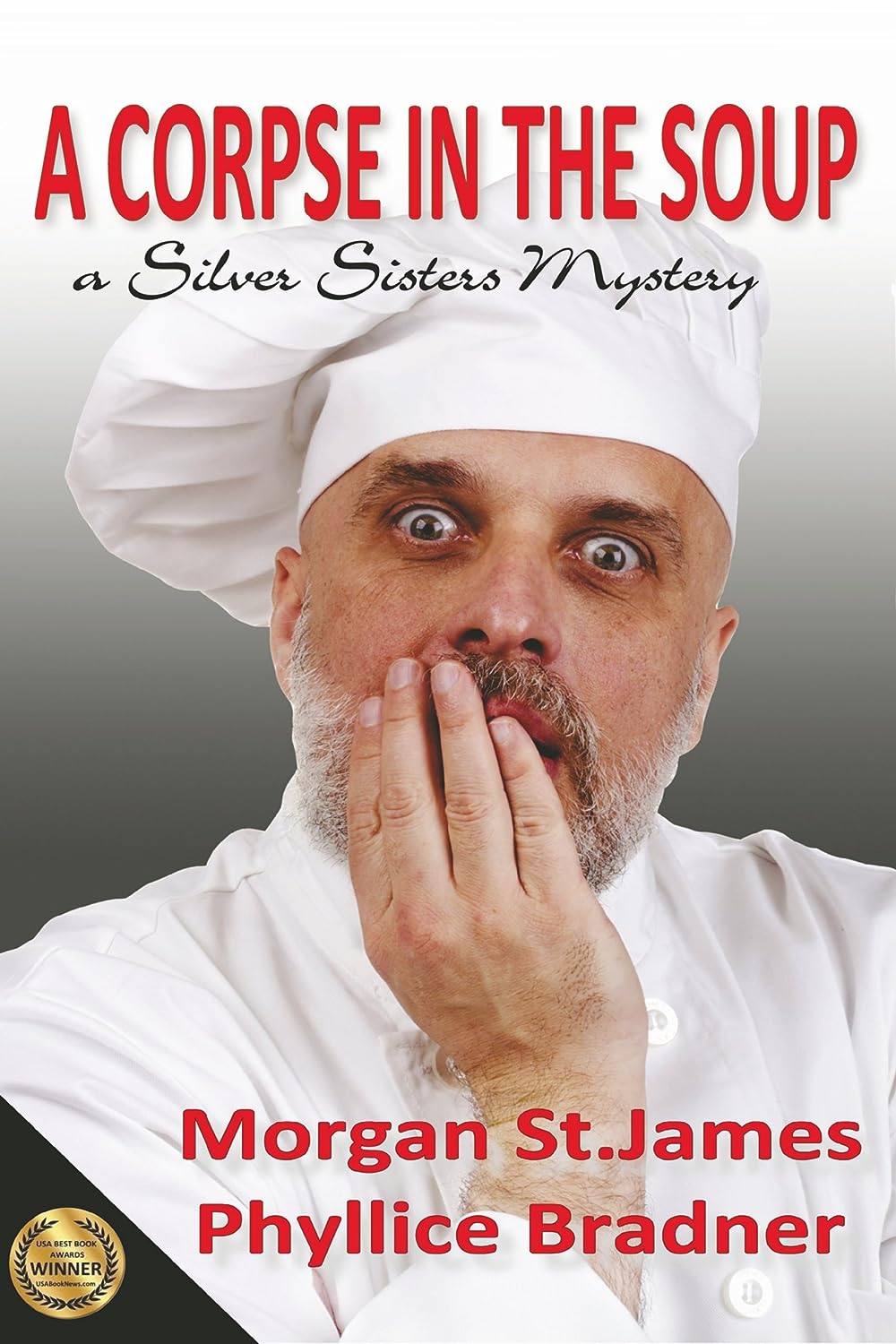 How is Writing In Your Genre Different from Others?
Fiction has a whole different set of rules than non-fiction and in funny mysteries you can go “over the top” as long as the story maintains a strong story line, no timeline conflicts and characters the readers feel they would like to know in person. With 11 books in publication, I’ve written in other genres, but have the most fun with funny mysteries.

What Advice Would You Give Aspiring Writers?
Don’t give up, but DO learn your craft. It isn’t a slam dunker and there a myriad of things to learn. Don’t submit a manuscript before it is polished to what you perceive to be perfection. Let some beta readers read it an comment. You generally don’t have more than one shot at a particular agent or publisher with a book, so make it a good shot. If you are self publishing, that becomes even more critical. Hold yourself to the standards of the best publisher you can think of. Don’t put out garbage.

What Inspired You to Write Your Book?
My sister Phyllice Bradner and I were both published writers but not in fiction and we both loved funny mysteries. She lived in Alaska and I lived in L.A. and she came down for a visit. By the time she left we’d decided to write our own mystery series and had the general idea of what it would be.

But it wasn’t that easy. We may have been seasoned writers, but we had a lot to learn about writing fiction. Eventually we worked with a manuscript evaluator and learned so many fine points that I now give writers’ workshops and published a book on writing. As for A CORPSE IN THE SOUP it was almost completely rewritten over the period of a year, and wound up with an award from USA BOOK NEWS naming it the Best Mystery Audio Book. It also cemented a friendship between my sister and me that has endured.

About the Author:
A frequent panelist, moderator, speaker and radio talk show guest, Morgan St. James also presents a variety of workshops and is a columnist for the Los Angeles and Las Vegas editions of Examiner.com. She publishes the free bi-monthly eZine “Writers’ Tricks of the Trade.”
With 11 books to her credit, in addition to writing her own novels like “Berayed” and the upcoming funny crime caper “Ripoff” as well as “Writers’ Tricks of the Trade: 39 Things You Need to Know About the ABCs of Writing Fiction,” a handbook for writers at all stages of their careers, Morgan and her sister Phyllice Bradner co-author the award-winning Silver Sisters Mystery series. “A Corpse in the Soup” was named Best Mystery Audio Book in 2007 by USA Book News and they are currently working on the 4th book in the series, “Diamonds in the Dumpster.”

She collaborated with true crime writer Dennis N. Griffin to write “La Bella Mafia,” the shocking but inspirational true story as told by Bella Capo whose book and life will be the topic of the Special Speaker event on February 8 at 5:45. She is currently working on another true story with Dennis entitled “Izzy and Me,” as told by the daughter of a mob associate who was also a hair stylist to the stars.

Many of Morgan’s award-winning short stories appear in her single author anthology, “The MAFIA FUNERAL and Other Short Stories” which has just been released as an audio book in addition to the paperback and Kindle editions. She has also contributed stories to various anthologies featuring multiple authors including two Chicken Soup for the Soul books. She is on the board of Writers of Southern Nevada and belongs to several writers groups.