You are here: Home / Fiction / Science Fiction / A Beginner’s Guide to Invading Earth by Gerhard Gehrke 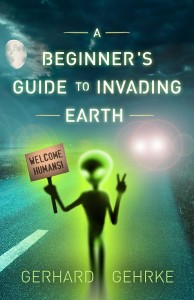 What would you do if you found a dead alien on a lonely highway?

Was it an accident, sabotage, or murder? And why is everyone blaming Jeff?

The extraterrestrials aren’t waiting for answers. They want revenge. And Jeff isn’t ready for company.

His only hope is an outcast mechanic from another world and a woman who might do anything to get off planet, including selling out her own kind. Jeff has to get to the bottom of why there are so many alien bodies piling up and who is really responsible.

A science fiction adventure novel, A Beginner’s Guide to Invading Earth tells the story of a reclusive ex-computer programmer who is the unwitting central figure of a plot to keep humanity from ever making first contact.

What Inspired You to Write Your Book?
A Beginner’s Guide to Invading Earth began in my work truck’s notebook with the line “No one likes them very much.” This was to be the conclusion reached by aliens intent on first contact who reached the USA and decided to try other parts of the planet after some unfortunate experiences. This became the aliens wanting nothing to do with the entire planet and them hanging a virtual “Do Not Disturb Occupants” sign on our doorknob. As I fleshed this out over a few months I decided a more focused story that centered on one man’s experience as a scapegoat for an alien conspiracy just felt better. By then I had a rough idea on where I wanted the project to go.

How Did You Come up With Your Characters?
For emotional honesty each character has a part of me in them. The main character Jeff Abel is paranoid and fearful of technology, which is understandable considering the revelations in recent years about NSA spying. The second lead character Jordan is faced with the temptation to betray her own kind in exchange for being taken from Earth. How many of us wouldn’t at least be tempted to give up everything for a chance to experience something no other human has. And the main villain is just frustrated in doing a job that no one understands and no one appreciates and that has driven him a bit loony.