You are here: Home / Fiction / Action & Adventure / 9: 9 Stories of Fiction by Mark Wilkins 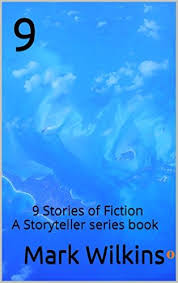 From what is going through the mind of a suicide bomber, to a rich man who has an epiphany from an encounter at a store, to the story of an every man who becomes a hero through unspeakable violence this book of fiction gives you stories that will thrill you, surprise you and make you think. If you are looking for fiction that is unusual and stories that will stay with you for years to come, you only need to count to 9.

What Inspired You to Write Your Book?
World events and flights of my imagination have inspired me to write this collection of 9 fictional short stories. The stories are dystopian in flavor. The longest and arguably best story entitled “Fear and Retribution” is about an immigrant who runs afoul of a family from hell. Mr. Boston’s first day is science fiction. The Commitment, which i chose to submit for you here is about what goes through the mind of a suicide bomber on his way to his bombing.

How Did You Come up With Your Characters?
I created the characters from snippets of ideas I have for stories, I later place characters into the ideas and flesh them out as I write.

Book Sample
The Commitment
By M Wilkins
Oofa Poofa made a commitment to join the terrorist organization. He came from a poor family in the village of Mamalulu Southeast Dadastan. He was opposed to the tyranny of President Gogo’s brutal regime. He hated the oppression against his village. He hated the persecution of his family for following the Mamasect instead of the more popular Dadasect that most of his nation followed. The previous regime had shown tolerance for his people but Presdient Gogo wanted to wipe Mamaism from the soil of Dadastan forever.
Oofa was indoctrinated into the terrorist mentality. He was given a constant verbal barrage listing the acts of oppression his people had struggled with all of his life. He learned that it wasn’t normal. He was made to believe in the virtue of dying for the cause. He was trained in military tactics and how to shoot a gun. He was trained on how to blend in with a crowd while being packed with explosives and how to pick targets.
Last night, he was sent to the nearby Military town of Kilakilla. He spent the night at a terrorist hideout disguised as a book store. He ate a wonderful meal, perhaps the best of his life. He filmed a video stating that he was opposed to the injustices his people had suffered. He gave cryptic goodbye messages to his friends and family without naming them.
Today was the day that he would make the ultimate sacrifice for Mamaism. He emerged from the terrorist hideout in the guise of a fat man. He walked down the narrow streets into the marketplace. He saw a group of the dreaded Mustafa Guards, President Gogo’s Elite Special Forces. As he walked towards them, one of the soldiers made a statement meant to imply that a fat slob was coming towards them.
As Oofa got closer, he began to have second thoughts. He knew that the government would condemn his actions. He knew they might take their anger out on his family. He knew that his death would be a tragedy. He realized that he didn’t really want to die. He decided to turn around and walk away in the next five steps. He counted them off, one… two… three.
Just then, one of the soldiers noticed a wire hanging out from Oofa’s shirt. The soldier shouted something as he reached for his holster. Oofa knew it was too late for second thoughts. As the soldier drew his pistol, Oofa pressed the button. He didn’t do it as a result of his training. He didn’t do it out of a commitment for the cause. In the end, he did it because he knew he was going to die anyway. An explosion rocked the marketplace killing all of the soldiers. Oofa was a martyr for Mamaism. Or was he?
Copyright 2015 Love Force International Publishing Company. All Rights Reserved.

Buy 9: 9 Stories of Fiction On Amazon