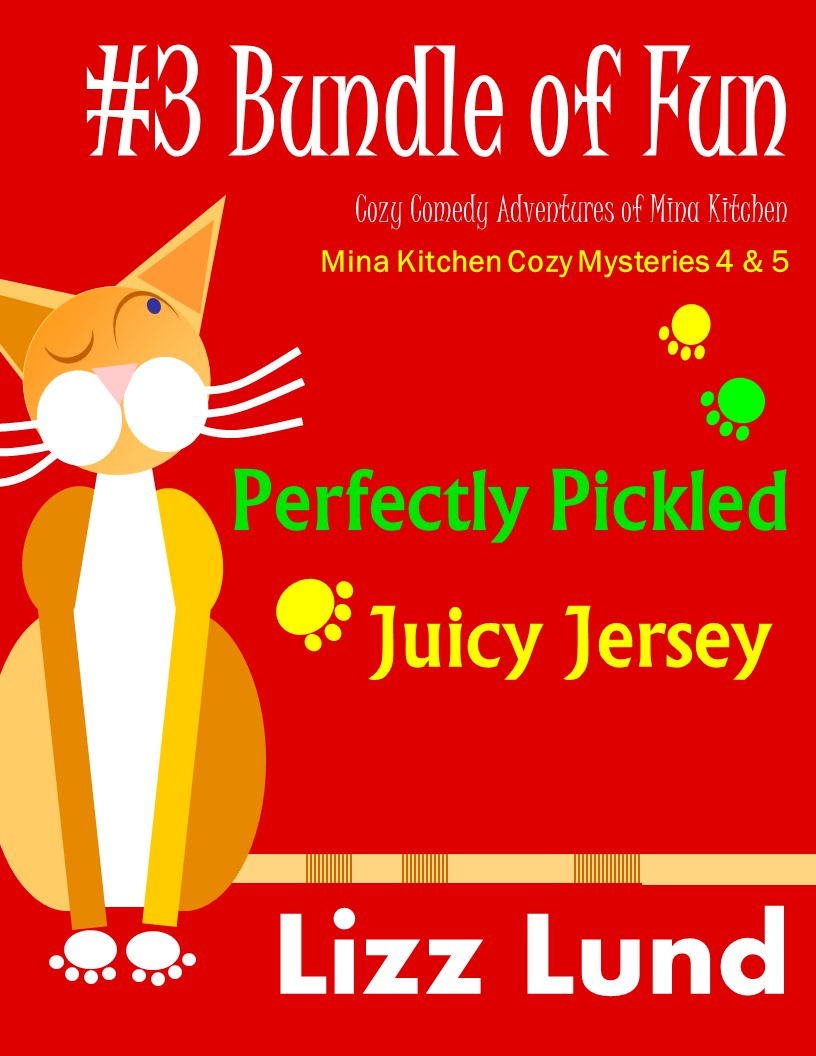 2 FUNNY 5-STAR MYSTERIES for the cost of one? BOGO! Grab this bundle now! PERFECTLY PICKLED and JUICY JERSEY!

If you’re looking for funny novels for women, packed with humor, chatty animals (in the guise of pets) — and recipes — look no further. Lund’s cozy mystery series – Books 4 & 5 – are hilarious light-hearted mysteries that blend delightful characters and great dialogue with a dash of thrillers and suspense. These cozy comedy capers whip up frothy fiction that’s sure to amuse Kindle readers.

BONUS: Chock full of delightful surprises, both mysteries finish with a bonus section of free recipes, vetted by Lund’s chef husband, for your culinary pleasure!

PERFECTLY PICKLED
Spring is here–things are looking up! Our hero, Mina, has a new car. And she even has a boyfriend or two lined up. But all hope of smooth sailing vanishes when she hits a bump in the road: she loses her job. Luckily, she stumbles upon a full-time job. A rather peculiar job, with some definitely odd co-workers. Who try to kill her–and Chef Jack.

JUICY JERSEY
Summertime, and the living is… not as easy as Mina had hoped. But, she finally has a full-time job, working alongside her new boyfriend, Jack (that is, Chef Jacque, when they’re at Squirrel Run Acres.) That’s good, right? Except when tempers flare hotter than fat on a fire. But Jack steps up to the rescue and splurges for a romantic get-away to Cape May, New Jersey. All is forgiven and soon sunset beaches wink from the distance, until their journey through Jersey stumbles upon the discovery of Babette Bernstein. Her murder launches a connect-the-dots of corpses that ripples dangerously around Mina and Jack. Oh–and the kidnappings, plural–are a little scary, too.

What Inspired You to Write Your Book?
Of course I'm a fan of Janet Evanovich… and then I became unemployed… and then found myself in some odd predicaments which quickly turned into, "fiction fodder." Really.

How Did You Come up With Your Characters?
Really, the voices in my head. They are named, for the most part, after dead relatives who are now systematically haunting me–I think they hold a grudge.</p>
<p>Mina Kitchen is actually the name of my great-grandmother, who I never met. And her catering disorder is umm… slightly autobiographical (I still can't bring myself to make potato salad with less than 5 pounds of spuds. I mean, really–who keeps just half a sack of potatoes in the fridge, anyway? It's all or nothing in our house.)</p>
<p>I keep track of the little things in life that I guess a lot of women run into… poking your eye with your mascara wand while driving in traffic, for example. Except for Mina, as she tries to wipe up the mess using her rear view mirror, she'll spy a corpse. Or armed thief. Or, a murder in progress at the hands of a delusional housewife having a deadly bad hair day.