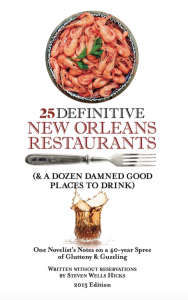 What inspired you to write your book?
I have written several New Orleans dining guides from 2011 through 2014. This is my sixth guidebook on the subject.

About your Book:
How can food-loving visitors to New Orleans find “real deal” cuisine in a city that offers them the choice of several thousand restaurants? Before becoming a full-time “local” in 2014, food critic and novelist Steven Wells Hicks spent forty years as an increasingly frequent visitor in search of the stories, people and dishes that make New Orleans one of America’s legendary culinary playgrounds.

Here he tells you about twenty-five of the more memorable places he’s uncovered, from white tablecloth temples of cuisine to a lunchroom where boiled crawfish are served on yesterday’s newspaper from a paper bag. You’ll discover an old Mafia roadhouse in the boondocks, a fried chicken joint in an iffy part of town and even a greasy spoon where the main course is attitude. And that’s just for starters.

Plus, because Man cannot live by French bread alone, Hicks point you toward a dozen of the city’s both famous and infamous watering holes.

Unlike most conventional guidebooks featuring single-paragraph hype pieces singing the praises of every restaurant in the city, Hicks takes a novelist’s approach to reviewing restaurants, opting instead for write leisurely pieces that not only tell you what’s on a restaurant’s plate, but also in a city’s culinary heartbeat.

Says Hicks in the book’s preface, “Ultimately this book is a valentine, sometimes left-handed but hopefully right-minded, to a city and the people of an industry that have simultaneously provided me with a lifetime of sensuous fulfillment while wreaking untold havoc with my waistline and the balance on my American Express card.”

Pulling no punches and pouring on the literary hot sauce when called for, Hicks has written a book that has become required reading for serious food fanciers planning their first or fifty-first pilgrimage to the undisputed “Food Mecca on the Mighty Mississippi.”

Sample Recipe or Food Advice
Cosimo’s
With its location in the lower end of the French Quarter, visitors thinking “Bourbon Street” are in for a gentle awakening.

It’s been over fifty years since the assassination of President Kennedy, perhaps the single largest source of conspiracy theories ever, and the story keeps swirling around that the plot was hatched in the back room of a New Orleans saloon.
Maybe it’s true. Maybe it isn’t. Anyone who knows is most likely dead, and if they aren’t, it’s pretty obvious they’re in no hurry to talk about it. At any rate, here’s the fact, if indeed it is a fact, and you can decide for yourself if it’s true, if it’s bunk or if you even give a damn.
The bar is Cosimo’s, a generally quiet watering hole in the lower French Quarter about two blocks in from Esplanade Avenue, the street generally recognized as the end of the city’s most famous historic district.
Myth, legend or whatever, it’s said that the Kennedy assassination was plotted in the back room of Cosimo’s by none other than Lee Harvey Oswald himself. If that’s true at all (and that’s a Texas-sized if), depending upon which conspiracy theory is being promoted at any given time on late-night cable television, the co-conspirators could have had the back room packed with Mafiosi, Cuban mercenaries, Soviet KGB agents, the FBI, Southern segregationists or even Lyndon Johnson (although I suspect someone would have looked up from their seat at the bar and recognized the Vice President of the United States when he walked in).
Now I have no idea whether there was a fiendish plot and it was hatched in the back room of Cosimo’s, but I’ve always been a sucker for a good yarn, so I decided to walk the two blocks from my apartment at the time and check it out for myself.
I liked Cosimo’s immediately.
I think the main reason was that there wasn’t anything tricked up about the place.
The beer is cold, the help is friendly and it’s nice enough without being trendy, self-conscious or tragically hip. In my mind’s eye, it’s the kind of bar where you stop on your way to dinner for a cold one, more of a way station than a destination.
As for the vaunted back room, where the crime of the century is reputed to have been planned, well, it looks like something out of an aging East Coast frat house. There’s a pool table in the center and scattered furniture that’s seen better days. At first glance, it looks far more likely to have been the scene of a keg party than a shadow-cloaked conspiracy. Come to think of it, it still does at second glance. And third.
Cosimo’s dates back to 1934, the year after “The Noble Experiment” was declared a failure and Prohibition was cleared off the books. With its wood-paneled walls and ceiling and several unremarkable chandeliers, it was perhaps a little swankier than it looks more than eighty years later. The back bar, with its columns, beveled mirrors and whisky cases tucked behind harlequin-glass doors, suggests that Cosimo’s was once a tad more elegant, or at least had pretentions of it, than the quiet neighborhood watering hole it is today.
With its location in the lower end of the French Quarter, visitors thinking “Bourbon Street” are in for a gentle awakening. The location at the corner of Burgundy and Governor Nichols Streets is one of the more quiet areas of the city’s most notorious districts, an area where people experiencing the Quarter for the first time start saying to themselves, “Yes, I could live here,” at least until they see the real estate prices.
While Cosimo’s gets a certain amount of visitor traffic due to its location, it is primarily a hangout for local residents. You’ll see a lot of Bloody Marys being served, not so much because it’s a brunchy kind of restaurant, but rather because they have a hard-earned reputation for serving one of the better Bloody Marys in a cocktail-fueled town.
In my forty-plus years of being above the legal drinking age, I have graduated from the noise and grime of the Bourbon Street maelstrom to the gentle nine-to-five vibe that may not be as good for tourist business but is less fraying upon the nerves of its residents. To that end, I find myself dropping by Cosimo’s when I’m in the quiet end of the Quarter.
Cosimo’s is not the Mardi Gras, voodoo, continuous parade, and anything-goes New Orleans that most people come to expect if they watch enough TV. Rather, it’s the New Orleans that city residents try to quietly preserve for themselves. And as any conspiracy buff knows, the most successful conspiracies are built out of silence.
Of course, you never heard this from me.

What formats are your books in: Both eBook and Print

How do you see writing a food/cookbook as different from writing other genres of books?
It’s more personal.

How did you decide how to publish your book and where is it published through:
I publish my books through CreateSpace Independent Publishing Platform.

Author Bio:
Novelist Steven Wells Hicks (Destiny’s Anvil and The Gleaner) spent the past forty years driving down Interstate 55 from Mississippi in search of the best food and drink New Orleans has to offer. Along the way he not only took notes, he took names.

What started as irreverent reviews for friends and relatives grew into a widely followed blog site, and ultimately a series of five guidebooks that regularly found their way to the top of Amazon.com’s lists of best-selling books about dining in New Orleans.

For 2015, Hicks combed through his inventory of articles and observations and redacted them to the twenty-five restaurants and twelve saloons that would lead readers to the “definitive” New Orleans dining and drinking establishments.

Born in Omaha and a product of Phillps Exeter Academy (’68) and Coe College (’72), Hicks spent most of his career in advertising, where his focus was on tourism, hospitality industries and politics. In 1977, he wrote his first paid restaurant review for the late Jackson magazine.

Buoyed by the 2014 success of Destiny’ Anvil, Hicks and his wife, nationally acclaimed jewelry designer Lil McKinnon-Hicks, pulled up their Mississippi stakes and moved to New Orleans. They have since settled into a purple house in the city’s Algiers Point Historic District, where they are regularly interrupted by a steam-powered calliope on the celebrated sternwheeler Natchez.