You are here: Home / Interviews With Authors / Interview with Author – Justin Lee Anderson 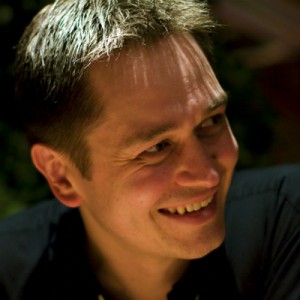 About Justin Lee Anderson:
Born in Edinburgh, Justin spent a decade of his childhood bouncing around the US, following his dad’s professional football (soccer) career. He returned to the Scottish capital in his teens and, after a few brief sojourns to Dundee (for an English degree) and the South of France (for his family), settled back in the city that’s always been ‘home’.

In over 15 years of writing and editing for a living, he’s done everything from restaurant, theatre and comedy reviews to training manuals and magazines, including four years as the writer, editor and photographer for an Edinburgh guidebook. Currently working as a Content Editor, he lives with his Brady Bunch family in a permanent state of happy chaos.

He has the same initials as the Justice League of America, and his favourite writers are Neil Gaiman, Aaron Sorkin, Joe Abercrombie and Joss Whedon, in no particular order.

What inspires you to write?
I just love telling stories. I like to tell the stories I would want to read, which tend to be escapist adventures with interesting characters. More than anything, I want unpredictable and original. Nothing puts me off a story more than knowing exactly what’s going to happen next. I think too many writers follow a formula where they feel the need to drop hints and foreshadow things to come, but once you’ve read enough, you tend to know what they all mean. Once that happens, the surprise is gone. The great moments I remember from most stories, whether books, TV or film, are invariably those where I was surprised, where my expectations were totally usurped. I love that.

Tell us about your writing process.
I’m mostly a seat of my pants writer. I have characters, an overarching plot and some plot points/emotional beats I know I want to hit along the way, but more than anything I let the story and characters guide me. A lot comes to me as I’m writing, including new characters, or characters I thought were going to be a bit part turn out to be much more interesting than I thought they would be, so I go with them. What I try never to do is take characters in a way that doesn’t make sense for them, because that’s where I want the plot to go – that’s another writing sin for me. The characters should lead the plot, not vice versa.

For Fiction Writers: Do you listen (or talk to) to your characters?
I talk to myself! My wife is always picking me up on it. I actually have their conversations in my head, but sometimes they leak out and I’m actually sitting alone in a room whispering to myself as I go through the conversation! It’s only really weird when I get lost in one of those conversations walking down the street and realise strangers are looking at me like a madman who’s talking to himself. 🙂

What advice would you give other writers?
Write your own story in your own voice. Don’t try to mimic someone else or fit into a formula.
When you’re writing dialogue, say it out loud and think about whether you’ve every heard anyone actually say that, or whether anyone would really speak in that way. Too much dialogue is written in a way that doesn’t ring true because it looks good on paper but in reality, nobody would ever speak in that way.
Pay attention to the rhythm of your writing. Again, say it out loud. It should flow and have a nice beat to it. Dr Seuss is the absolute genius when it comes to rhythm. The Sleep Book is an amazing example of how words can be set to their own music. You don’t want to write prose in rhyme the way he does, but he’s an amazing example for understanding the rhythm of language.
And finally, don’t overwrite. If a sentence feels too long, take words out until it stops working, then put back the last word you took out.

How did you decide how to publish your books?
I spent some time looking into getting an agent and had a few very nice, helpful refusals. Mostly, I just didn’t have the time to commit to submitting properly to every agent or publishing house that would accept unsolicited submissions. So I decided to self-publish – and just before I did, an opportunity came up to work with a small publishing startup. Unfortunately, life got in the way of that opportunity, but through it I was introduced to Wild Wolf, who wanted to publish the book, and so it was! I think most authors these days will start out as indies and make a name for themselves on their own before agents or the big publishing houses will take a risk on them. They’ve all become very risk-averse, so someone with a track record and fanbase is more appealing than an unknown they take a total gamble on.

What do you think about the future of book publishing?
As I said, I think most authors will work their way up from the indie scene now, rather than go straight in at a major house. I don’t think the full effects of e-books are clear yet, but the industry is adjusting. At some point, I think the use of e-books will be such that big houses will actually start taking more risks, knowing they have a low costs base to launch an e-book author, as opposed to the traditional costs for launching a print line. So that’s where I think we’ll go – new authors will always start as e-books and go to print only when they find their audience.