You are here: Home / Autobiographies, Biographies & Memoirs / Wild Tanuki: From Lost To Found Skateboarding Across Japan by Sean Elliott 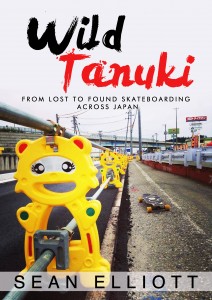 What inspired you to write your memoir?
I was posting daily reports of my skateboarding trip across Japan on my blog and many people were telling me how much they enjoyed reading them. A friend suggested that I should write a book, and so after many many hours of sitting in a cafe and rewriting, I had my first book.

About your Book:
After seven years and 20 passport stamps from going to Japan and back, Sean quits the Alaskan oilfields to move to Tokyo and live the Japanese dream. His new life includes eating ramen noodles, riding immaculate trains, drinking beer outside without getting put in the back of a police car for it, and dating girls with chests much smaller than his.

Life is good at first. Sean attends a Japanese language school, doesn’t work and generally splits his time between playing Playstation and exploring the streets of Tokyo on his skateboard. Then he gets a job teaching English, during which he hands small children paper balls so they can throw them at the stick figures of white and black people drawn on the whiteboard.

The new job is fun for a while but it soon grows old. Sean grows tired of wearing a necktie while it feels as if the best years of his life are slipping away like beach sand through his fingers. Life becomes a boring routine again, and he takes to popping the caps off fat-tipped, black Magic Markers and sniffing them in between teaching periods just to feel alive again. But soon his tolerance grows, making the high disappear and he becomes even more unhappy.

So what does he do? He summons balls the size of a wild tanuki to tell his boss he quits and watches Forest Gump in Japanese over and over. Then, together with his skateboard, Sean hops on a plane to Hokkaido (Japan’s northernmost island) where this story begins.

How did you decide how to publish your book and where is it published through:
Another friend introduced me to Kindle self-publishing, and I was immediately interested. It’s only on Amazon at the moment.

How do you see writing a Memoir as different from writing other genres of books?
An imagination isn’t necessary to write a memoir. You don’t have to make anything up, just go out and do something you’re interested in and share you’re experience. Somebody out there will be interested.

Author Bio:
Sean lives in Tokyo in a shoebox-sized apartment. In his free time and while at his 9-5 job, if he can or can’t get away with it, he likes to read, write, and daydream of new adventures he’d like to set out on, like skateboarding across Cuba and changing his name to Sancho Panza and riding a donkey across China.