You are here: Home / Bargains and Freebies / Bargain Books Under $3 / Wander Home by Karen A. Wyle 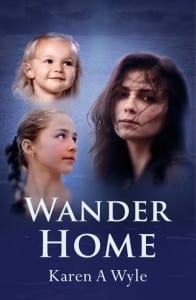 Eleanor never wanted to leave the daughter she loved so much. The overpowering urge to wander — to search, without knowing what she sought — drove her away. She left little Cassidy in her family’s loving care. But Cassidy and the others died in an accident before Eleanor could find her way home.

Now, they are all reunited, in an afterlife where nothing is truly lost: places once loved may be revisited, memories relived and even shared. Surely this is a place where they can understand and heal. And yet, the restlessness that shaped Eleanor’s life still haunts her in death. Somehow, she must solve the mystery of her life — or none of them will be at peace.

Targeted Age Group:
adult and some YA

Author Bio:
Karen A. Wyle was born a Connecticut Yankee, but moved every few years throughout her childhood and adolescence. After college in California, law school in Massachusetts, and a mercifully short stint in a large San Francisco law firm, she moved to Los Angeles, where she met her now-husband, who hates L.A. They eventually settled in Bloomington, Indiana, home of Indiana University.

Wyle’s childhood ambition was to be the youngest ever published novelist. While writing her first novel at age ten, she was mortified to learn that some British upstart had beaten her to the goal at age nine.

Wyle has been a voracious and compulsive reader as long as she can remember. Do not strand this woman on a plane without reading matter! Wyle was an English and American Literature major at Stanford University, which suited her, although she has in recent years developed some doubts about whether studying literature is, for most people, a good preparation for enjoying it. Her most useful preparation for writing novels, besides reading them, has been the practice of appellate law — in other words, writing large quantities of persuasive prose, on deadline, year after year.

Wyle and her husband have two intensely creative daughters, the older of whom introduced Wyle to National Novel Writing Month (NaNoWriMo), for which she will be forever grateful.

What Inspired You to Write Your Book?
An abiding interest in themes of family communication and reconciliation, and the realization that one could create an afterlife that would assist in those processes.