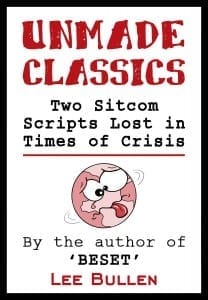 ‘Unmade Classics’ features two wholly remarkable sitcom scripts, picked-up by production companies with no fanfare whatsoever, and ultimately cut during the infernally indeterminable Global Financial Crisis (2008 till God-knows-when!). Until now ‘Where Are They Now?’ and ‘New Ageing’ have only been seen by several producers, my Nan and an unwitting recipient of a clumsily-sent email. However, Mr. Grayson of Wyoming gave it a hearty thumbs up and proudly boasted that he ‘chuckled maniacally’ – which is nice. Also, a squirrel is said to have successfully recovered after it overheard Mr. Grayson reading aloud and squeaked hysterically for three whole days, but this is only conjecture by the author.
If it wasn’t for the gluttonous greed of bankers you’d probably be watching these shows instead of reading them, but at least they’re now available in this modestly-titled and utterly hilarious e-book!
Unmade Classics – a must for lovers of sharp situation comedy.
By Lee Bullen, author of ‘BESET: A Desperate Search for Happiness in Times of Crisis’.

Lee Bullen is a novelist and screenwriter who currently shares a Spanish writing retreat with his two children and an army of cacti. Although he openly admits preferring the company of his kids to any neighbouring succulents, he does, however, have a favourite palm tree.