You are here: Home / Fiction / Science Fiction / Universe: The Edge of Tomorrow by R. M. Dilleen 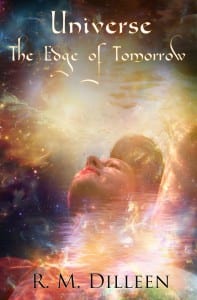 Lidda Kandell’s best friends at college are not what they seem. They give her a strange toy, called a Magiton, which reads her mind, accelerates her learning, and creates hallucinations for her entertainment. She discovers that it contains a twisted personality of alien origin and is thousands of years old. She gives it a pet name, Widhbo (wee’ bow).

Lidda soon learns that her friends aren’t from Earth either. Just as she is falling in love with a handsome alien, she discovers that her own identity is in question. She has been cleverly deceived and manipulated from birth to assist them in fighting a galactic battle against an evil Dark Overlord who threatens the very existence of her planet. Widhbo assists Lidda in developing a superior line of androids to populate the Earth in the attempt to create an island of hope for the universe.

Lidda learns that the cosmos has become populated with Magitons, beings who long ago transcended their humble organic origins, uploaded their minds into nearly indestructible crystalline vessels, and achieved immortality. Traveling the vast expanses of space and absorbing the learning of every civilization they find, Magitons have achieved incredible power and are essentially gods to the mortals they encounter. But now one of these immensely powerful beings has gone mad, and the other Magitons have placed all their hope in humanity-their own humble origins-in a long-shot attempt to defeat the Dark Overlord and prevent him from becoming the Great Destroyer of Prophesy.

Lidda falls in and out of love, struggling to maintain her humanity, as her life and everything she believes is turned upside down. Her definition of reality is constantly challenged. The new androids discover they have a soul and Widhbo becomes harder to handle as he loses his fragile hold on sanity. Lidda must decide what she is willing to sacrifice in the battle against a demon with the power of a thousand worlds in order to save them all.

This is the first novel of the Universe series.

What Advice Would You Give Aspiring Writers?
Focus on writing and discipline yourself to write a little every day. If you are obsessed with a plot idea, write like mad and clean it up later. If you aren’t inspired to add new material, then polish what you have written. If you find a scene or chapter in your story doesn’t click, let it rest and come back to it later.

Brainstorm for plot twists and throw monkey wrenches into your best laid plans. Struggle with your characters as they figure out how to get out of the mess and avoid lazy solutions. Find out what techniques work best for you such as story boards, character cards and outlining. Flesh out your characters beyond what is needed and really get to know them.

Read a lot of other authors in many different genres. Do your homework and learn the technical skills of writing. Join a critique group and find people who will give you objective criticism of your work. Realize that you will be doing a lot of revisions. Don’t be lazy about it.

Hire the best editor you can afford. Don’t assault the reader with bad grammar or misspelled words. Don’t short change the reader with hasty or sloppy work. They can tell. Finally, when you think you’re ready to publish, put it down for a couple of weeks and look at it again.

Take care of your health. Take breaks to exercise regularly and throw out the junk food. I know that caffeine is the holy elixir which allows those with day jobs to write through the night, but drink at least two glasses of water for each infusion of caffeine.

Expect rejection. You can’t please everyone and it would turn out rather bland if you did. If you are too sensitive, get someone else to filter through your bad reviews or email. Let them toss out the trolls and mean stuff. Ask them to distill out the constructive criticism from negative reader input. You can enjoy reading 4 and 5 star reviews until your skin is thick enough to handle it.

Author Bio:
I am semi-retired with a background in science and medicine. My goal in writing is primarily to entertain my readers. I have been working on the Universe series for about ten years and published the first novel, “Universe: The Edge of Tomorrow”, in May 2013. The world of the Universe series explains superstitions, myths and magical phenomenon in the context of science and natural means. The stories ride upon this framework with an added sprinkling of fantasy. They also embrace the possibility of the supernatural and mystery of the unknown while exploring philosophical ideas, the eternal struggle between good and evil, & the human experience

What Inspired You to Write Your Book?
I have always loved science fiction and fantasy. The book really does take over. It gets in your head and screams to get out. I lost a lot of my work in a computer crash several years ago and became discouraged. The book was still there, evolving, and I had to pick it up again. My favorite character was born out of the chaos, a twisted alien from another dimension called Widhbo (wee’ bow). I hope my readers like him as much as I do!