You are here: Home / Autobiographies, Biographies & Memoirs / Unconditional. Based in the true story of a metanoia by MaitriLorenzo Ventura 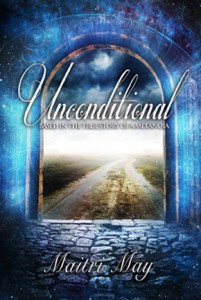 What inspired you to write your memoir?
I was doing a meditational retreat, re-evaluating my life and looking for “what to do next”, as my life was in a crossing point. During the meditations in the 21 days retreat I got the idea of writting it, which funny enough as a child I also thought I would write books when I would be older, but forgot about it.

About your Book:
Martha was not born just to sit down and see her life passing in front of her eyes as watching a movie. She had to play a role in her life where she was the main character, but she had to decide what kind of movie she wanted to be living in and for that, she goes through a journey of changing her own mind, concepts, heart, self and ways of life. She meets a friend who gives her advices, driving her slowly to change her perception and concepts in life. Her friend always insists that whatever psychic power might show up in ourselves is not something that belongs to only one person but to everybody, because it is a part of our nature. The only difference is how much we believe in them and our self-confidence. However, adversity is part of life and she will have to deal with it if she wants to develop skills that will be needed to continue her journey.
She travelled to different countries from where she enriched her being and learnt that when life does not go in the way we want, we should not blame our past and get stuck, but to look for a different path that suits better our aims in life. She had experiences which showed her about the power of the mind and of thoughts.
She worked as a volunteer in a catholic mission in Mexico and one year later went traveling to Central America till she decided it was the time to continue with her destiny of going to India. There, she worked also as a volunteer for Mother Theresa, but something happened which created the point of no return and changed her life again. It goes through basic topics – children, friendship, relationships, education, work, money – as well as spiritual ones – faith, intuition, God, inner self, psychic phenomena, past lives – becoming a story for people who know there’s more in life than doing the same things like all the others. It´s just about the essential wisdom of listening to our inner self and following our dreams, about being brave, taking risks, daring to do something when people are always telling you not to.

How did you decide how to publish your book and where is it published through:
Nowdays it seems like everybody is writting books. For beginners, there is no other chance than self-publish. But also as beginners, we have no idea of how to do all the promotion.
I had to Google, and still I have to, just to be able to get some ideas.

How do you see writing a Memoir as different from writing other genres of books?
There is a mixture of things here. On one side, it´s like confessing your “most inner secrets” to the world. On the other side, the readers can identify themselves with the stories, because they are real. And going further, is like cleansing the interior of the things one might not have been able to “vomit” before.
And as it´s a reflection of one´s life, the memory is refreshed and also gives you the chance to give thanks to all that people who crossed in your life and you forgot they had such an influence in yours.

Author Bio:
May studied Teacher Training in a catholic university in Alcalá (Madrid) and also got training as Leader and Director of Free Time Activities.
Worked as a volunteer teaching children for the Catholic Holy First Communion, as well as in Caritas, in the Boy-Scouts of Spain and Venezuela, in a Catholic Mission in Mexico, for a NGO for Street Children in Oaxaca-Mexico, a NGO for Indigenous People in Ayutla-Mexico and with Mother Theresa in Calcutta-India.
She worked in a Farm School in Alcalá, as Leader, Director and Administrator for the summer school of an International School, and in different schools as school teacher and with very small children in a Crèche in London. Teaching later for adults in Japan and England.
She learnt different massages in Thailand, India, Japan, England and Spain, and lived basically in India for 12 years attending philosophy and spiritual teachings and seminars, doing spiritual retreats in India and Nepal, at the same time that learnt and shared with shamans in those countries and in Latin-America and Philippines. She learnt Tibetan Medicine with a teacher of Ment-See-Khan in Dharamsala, Reiki in Nepal, Tarot Card Reading in Guatemala, ESP Development (Extra Sensory Perception) with Jaime Licauco in the Philippines and Intuition with teachers from different countries.
She gave lectures and seminars in different themes like Energy Work, Aura Reading, Healing (Crystal, Energy, Past lives, Tibetan), Intuition and Shamanism, in Barcelona (Spain), and gave a talk in the radio.
Currently she is working in Germany giving massages and as Lebensberater, Psychologischer Berater (TMI), Hypnotiseurin (TMI), and does tarot cards readings and clairvoyance.