You are here: Home / Fiction / Historical / Trust To A Degree by Horst Christian @HorstChristian1 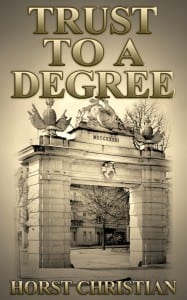 Book Two in the series. On May 3, 1945, Karl Veth is arrested, just one day after the fall of Berlin. He and his friend, Harold, had survived the last few days of the Battle of Berlin by taking refuge in the subway tunnels under the city. Up until the day before, the two 14 year old boys had been members of the Hitler Youth and now that Berlin had surrendered, they thought the horrors of the war were behind them. Unfortunately, that was not the case.

Arrested by a Russian political Kommissar, the boys are given the choice of helping him with his missions in Berlin or being deported to the Russian labor camps. They agree to help him and Karl hopes that when the missions are completed, he will be released to look for his family.

The final mission ends with a twist and instead of being released, Karl is given an ultimatum by the Kommissar that once again, leaves him in the position of having to choose between life and death. This time, the life he must save is not his own but that of someone very close to him. And in order to save that life, he must agree to do something he has never done before – take a life.

How is Writing In Your Genre Different from Others?
It’s not so much the genre that’s different as the subject matter. Because I am writing based on my own life experiences, it can sometimes be difficult to bring up old memories of the time period. Some of the memories are good, but many others are difficult to relive.

What Advice Would You Give Aspiring Writers?
Never give up your dream of being an author. There are so many avenues open to self-publishing your books, so there’s no reason to put it off.

Author Bio:
Horst Christian was born in Berlin, Germany in 1930. His father, a mathematician and a banker, taught him to read and write before the age of 5. He discovered his love for writing by the time he was 10 years old and wrote vacation reports and several articles for the German school periodical “Hilf Mit.”

His favorite pastime was playing in the U-Bahn (subway) tunnels. While other children played soccer, Horst, with a few other likeminded children, explored Berlin by riding the subway trains.

Drafted to help defend Berlin against the Soviets at the age of 14 because of his unique knowledge of the subway system, he served as a guide for various SS demolition commandos.

In the early 1950s, Horst immigrated to the United States and became a US citizen after the mandatory 5-year waiting period. He loves to travel and has visited all 50 states in the US, most of Europe, Canada, Mexico, the Caribbean and some Central American countries. He now resides with his wife Jennifer of 41 years, in Northern California, where he has been for the last thirty years.

What Inspired You to Write Your Book?
This book, along with the first book in the series, was written based on my own experiences as a young boy in Germany during and after World War II.