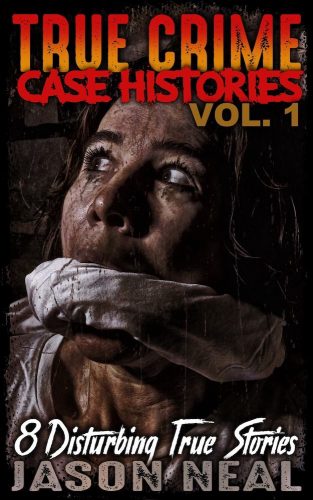 Eight True Crime Stories of Murder & Mayhem
First Book of the True Crime Case Histories Series (2019)
A quick word of warning. The true crime short stories within this book are unimaginably gruesome. Most news stories, television crime shows and true crime documentaries tend to leave out the most horrible details about murder cases simply because they are too extreme for the general public.

I have done my best to include full details of these stories no matter how sickening they may be. In these true crime stories you’ll find that truth really is stranger and vastly more disturbing than fiction.

In my first book as a true crime author I’ve started with a few of the stories that have haunted me for some time. Some of these stories are unbelievable in their brutality while others are astounding in the stupidity of the killers.

You’ll find a story of a religious evangelical christian who would rather strangle his wife and two young boys than lose his prominent job with the church.

Then there’s the story of a man that fills his wife’s orifices with grease so she will flammable from the inside.

There’s the story of the small-town doctor that goes through the unbelievable lengths of performing surgery on himself to avoid going to jail for raping his patients.

Plus there’s more stories of Serial Killers terrorizing cities and crime scenes that bring investigators and seasoned police to tears.

This collection of stories are from all around the globe and have no common thread between them other than that they are both thought provoking and disturbing.

The stories included in this anthology are dark and creepy and will leave you with a new understanding of just how fragile the human mind can be.

What Inspired You to Write Your Book?
Jason Neal is an American True Crime Author living in both London and Scottsdale, Arizona with his Turkish/British wife. Jason started his writing career in 1998 as a music industry publisher and wrote his first true crime collection in 2019.

As a boy growing up in the 80s just south of Seattle, Jason became fascinated with true crime stories after hearing the news of the Green River Killer so close to his home. Over the coming years he would read everything he could get his hands on about true crime and serial killers.

Now in his 40s, Jason began to assemble stories of the crimes that have fascinated him most throughout his life. He’s especially fascinated by cases solved by sheer luck, amazing police work, and groundbreaking technology like early DNA cases and more recently reverse genealogy.

Book Sample
On a April afternoon in 1996 a man calmly walked into a Manchester England police station to report that his girlfriend had accidentally drowned in his bathtub. The man was 48 year old James Patterson Smith and his girlfriend was just a 17-year old child. The truth was that Smith was a sadistic controlling psychopath and not only had the girl drowned, but she had been subjected to three weeks of some of the most brutal torture England had ever seen. The horrific crime scene brought seasoned police officers to tears.

Kelly Anne Bates was mature for her age. At age 14 when Kelly told her parents, Margaret and Tommy Bates, that she had a boyfriend they thought nothing of it. As any parent would, they assumed it was a teenage crush with a young boy from school.

Wanting to raise their children with a sense of independence, they gave Kelly a long leash and let her see her boyfriend as she pleased. It wasn’t long before Kelly started staying out overnight and her worried parents called police. When Kelly finally came home she told them she was staying at her friend Rachel’s house, but her parents had a sinking feeling that her story wasn’t true. They weren’t the only one concerned about Kelly’s whereabouts. Even though they had never met him, Kelly’s boyfriend “Dave” occasionally would call to ask where she was. What her parents didn’t realize at the time was that Dave was already tightening his control around Kelly.