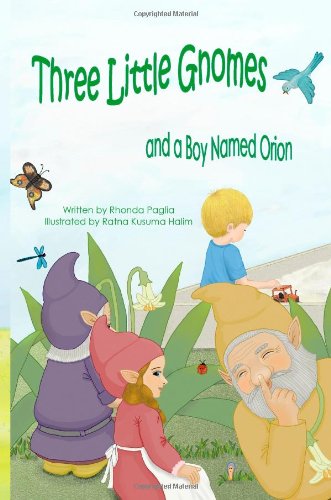 IMAGINE you are a little gnome. You live and work in Grammy’s beautiful garden. You have lots of happy friends and neighbors. Then one day you realize . . . you don’t have a name. You scurry around the garden looking for the answer. No luck! ​What would you do? How would you feel? Who would you ask for help? Find out how three adorable gnomes solve this gnome-sized problem . . . and make a new best friend.

What Inspired You to Write Your Book?
There are three little gnomes on one of the walls in our home. One day I asked Orion, our grandson, age 3 at the time, if he knew the names of the gnomes. He proceded to name them “Whiskers, Happy Tractor, and Getting a Hair Cut.” The names were so cute, I wrote a short little story for Orion titled, “The Gnomes at Papa and Grammy’s House.” So our grandson, Orion, was the inspiration for the original story and for the updated, fully illustrated version, now titled, “Three Little Gnomes and a Boy Named Orion.”

How Did You Come up With Your Characters?
In 2009, when our grandson, Orion was 3 years old, he gave the three little gnomes their original names. I updated the story, and only Whiskers retained his original name in the new version. However, the reader learns more about the gnomes and their life and jobs in the garden. They get to meet some of their friends, and they get to meet Orion, who helps them solve their name problem.

About the Author:
Rhonda Paglia is a children’s author, a retired elementary teacher, and a “not so retired” grandmother from Pennsylvania. “Three Little Gnomes and a Boy Named Orion” is her newest children’s book. Reading level, grades 2 & 3, interest level – ages 2+ . “Grammy Pags” as she is called, is also the author of 3 other published children’s stories: “The Little Lambs and the Very Special Mission” dedicated to the children and teachers of Sandy Hook Elementary School; “Doonsey’s Beach Adventure, the Great Rescue” and “Doonsey’s Beach Adventure, the Great Rescue, Coloring and Activity Book.” Doonsey is a little ocean crab that loves to explore. Rhonda writes for fun and she loves to encourage kids to write and illustrate their own stories.