You are here: Home / Fiction / There Comes a Season Volume 1 by John Kachuba 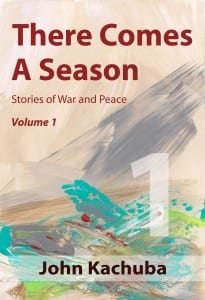 There are consequences of war that remain hidden, buried deep within the minds and hearts of not only the soldiers, but those who wait for them, those who may be many miles removed from the front lines. In two volumes, There Comes a Season tells the stories of some of these people, such as the jaded newspaper reporter who is shaken to his core by the massacre of Lakota Indians at Wounded Knee in 1890; or the personal photographer of Adolf Hitler, who fears for his Jewish wife in 1930’s Germany; or the young man who faces being drafted to fight in Vietnam. Here, also, is the story of the WWII infantryman who returns to Anzio, Italy only a few years after the war to find out why he didn’t die there; the African-American Vietnam vet who returns to an America that has no use for him; the New York deli-store owner who feels threatened in the wake of “9-11,” and the man who is haunted by the memory of his brother, a U.S. Marine who committed suicide in Iraq. Yet, There Comes a Season remains hopeful that, through stories such as these, we may know that war is never the answer.

John Kachuba is the author of twelve books, a Creative Writing instructor at Ohio University and Antioch University Midwest, and a member of the Historical Novels Society. He is also a member of St. John’s Unitarian-Universalist church in Cincinnati. A portion of the proceeds from sales of There Comes a Season are donated to the Intercommunity Justice and Peace Center, Cincinnati, Ohio.