You are here: Home / Fiction / Fantasy / The Superyogi Scenario: Rise of the Unusuals by James Connor 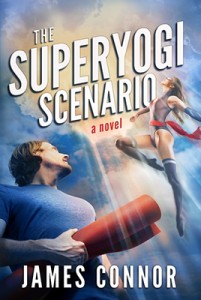 When elite yoga practitioners use their meditative prowess to fly and manipulate their bodies like superheroes, not everyone uses their powers for good.

“The supernatural meets the spiritual in this unusual, endearing thriller. Connor may have carved out a new subgenre.” — Kirkus Reviews

“In a world replete with novels, this story is a standout.” — Midwest Book Reviews

What Inspired You to Write Your Book?
The Superyogi Scenario is a new take on the superhero story. Instead of powers coming from radioactive spider bites or lab mishaps, powers are developed from yoga and meditation and based on authentic verses from The Yoga Sutra, a third century text.
I was in the middle of a three-year isolated meditation retreat. I wanted a fun way to give people a little taste of some of the transformations of heart and mind that occur at the higher levels of meditation—and do it in a page-turning thriller.
On Sunday afternoons in retreat, I would take a break from a week of meditating to write about characters who were experiencing supernormal transformations and the temptations that come with those powers. The novel ultimately concludes it’s not powers that makes someone a hero, it’s putting other people first.

How Did You Come up With Your Characters?
I wanted to create a new, more realistic take on the superhero story and examine what makes someone a hero.
When you study ancient scriptures and commentaries from the early centuries there are all these fantastic stories of Mahasiddhas, realized yogi meditators who performed supernatural miracles. Many of the great Mahasiddhas struggled when their powers started to emerge. Not all of them used their powers for good at first.
I wanted to imagine what would happen if western Mahasiddhas started to emerge from all the people doing yoga and meditating? What would their journeys look like?
By starting in an unusual place, I could tell a story that you haven’t heard before, filled with fresh characters who take readers on their journey to transcend ordinary views of reality.

Buy The Superyogi Scenario: Rise of the Unusuals On Amazon