In London, 1969, Jeffrey Mercier is just an ageing department store clerk with a long buried secret and a distant memory of a lost love, but when he is suddenly shanghaied by a woman who claims that she can travel in time, his dismal days in menswear are finally cut short. Jeff steps out of his timeline and into a whole new world of possibility and adventure, only to find that he is once again the automaton employee of yet another large corporation: The Time Agency. It has become his duty to protect the people of the future from the threats of their past.

Under the guidance of the struggling captain Marie-Elizabeth Giraud, Jeff learns that he has more in common with his fellow time traveller than he knows. As the adventurers exchange their tales of life and romance in times gone by, their popularity slowly grows in the media-mad atmosphere of the 27th century and Jeff discovers more about his past than he ever thought possible. But all is not well in the timeline, and these intrepid time agents are about to find themselves at the centre of a disaster that could destroy the universe, perhaps even time itself.

Targeted Age Group:
Suitable for all from age 15 up 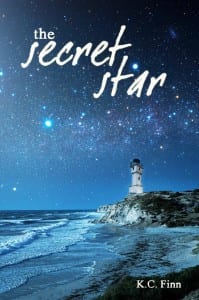 How is Writing In Your Genre Different from Others?
The Secret Star may be simply classed as science fiction but this story has so much more to it than that. You can expect a massive adventure in time travel with both historic moments and futuristic vistas. There’s romance, comedy, drama, life, death and plenty of action to keep you entertained.

What Advice Would You Give Aspiring Writers?
Don’t wait around to be shopped by some publisher! If you’ve written a book get it out there into the world with self publishing right now. No-one will ever recognise how good you are or how good you could become if nobody knows that your book exists. It is perfectly possible to return to more traditional publishing methods after being a self-published author, for example if I hadn’t started out with independent books like this one I never would have had the courage to write my teen paranormal series which has now been taken up by a publisher. Your dreams are possible, but only if you make them so!

Author Bio:
Born in South Wales to Raymond and Jennifer Finn, Kimberley Charlotte Elisabeth Finn (known to readers as K.C., otherwise it’d be too much of a mouthful) was one of those corny little kids who always wanted to be a writer. She was also incredibly stubborn, and so has finally achieved that dream in 2013 with the release of her first two novellas in the four-part Caecilius Rex saga.
As a sufferer with the medical condition M.E./C.F.S., Kim works part time as a private tutor and a teacher of creative writing, devoting the remainder of her time to writing novels and studying for an MA in Education and Linguistics.

What Inspired You to Write Your Book?
This book was inspired by my fascination with the Second World War, particularly the lives of British people living under Nazi rule in occupied territories such as the Channel Islands. I also adore the rock and roll era of the late 1950s and wanted to bring some characters to life who originated in that time period when the post-war freedom of expression era was really coming about for the first time.