You are here: Home / Bargains and Freebies / Bargain Books Under $3 / The Reluctant Coroner by Paul Austin Ardoin 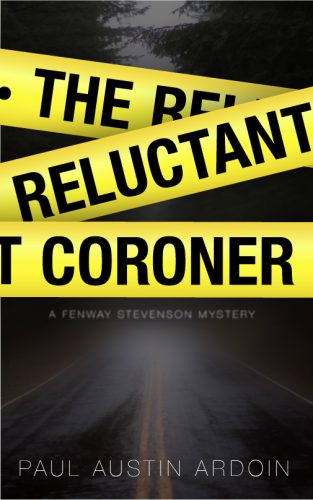 Blood is thicker than oil–until murder is involved.

Fenway Stevenson doesn’t want to return to the coastal town where her estranged father is practically king. But the death of her mother draws her back home–and the murder of the county coroner draws her into a deepening conspiracy. As the body count rises and all signs seem to point toward her father’s oil company, will Fenway uncover the truth before family bonds become deadly?

What Inspired You to Write Your Book?
On October 31, 2017, Facebook popped up one of those “on this day” messages: “I’ve had this idea for a murder mystery in my head about a coroner named Fenway. I think I’m going to sign up for NaNoWriMo and start writing it this month!”

That message was EIGHT YEARS OLD.

I always believed that one day I’d write a novel, but I never got past the halfway point. When I saw that Facebook “on this day” message come through, it felt like a slap in the face. Had I really spent the last eight years doing absolutely nothing to make my dream of becoming a novelist a reality?

How Did You Come up With Your Characters?
A friend of mine named his daughter after his favorite athlete, and I joked about him liking the sports team so much, he should have named her after the stadium. And then I thought… what stadiums would make good girls' names? "Fenway" (after Fenway Park, home of baseball's Boston Red Sox) was the winner. Then I thought about the type of father who would name his daughter after a stadium, and how that would reveal more about his character than hers—but obviously, she'd be reacting to his love of the Red Sox every day of her life.

The crucial relationship in the book is between Fenway and her father, and she puts herself in constant opposition to him. The secondary characters came from research, or are based loosely on people I've seen in similar roles.

Book Sample
McVie floored it once he was on the main road. Fenway glanced over at him; he was wearing a black tee shirt that showed off his muscular arms, flexing slightly as he gripped the wheel. She suddenly remembered fleeting images from the dream she was having when she woke up: her legs wrapped around his torso, his strong arms around her back, her breaths coming short and fast, his lips on hers. She turned her head and stared at the road, feeling the color rise to her cheeks, trying to push the images out of her mind.
They made it to the coroner’s office building in about half the time it had taken the morning before.
“You really need to get a car,” he said.
He pulled around to the side of the building. Fenway’s jaw dropped; there was a hole where the window to Walker’s office used to be. Two sheriff cruisers had their lights going, but no sirens sounded. Three uniformed officers were standing a few feet away from the hole in the building.
“Dammit,” McVie muttered. “Dammit, dammit, dammit.”
He braked hard to a stop, threw the gear angrily into park, and jumped out of the car without turning it off. “Fenway!” he barked. “See if you can tell if anything’s missing.”
She got out and walked over to the planter between the driveway and the side of the building. There was a messy tangle of flattened bushes and shrubs where a large vehicle—maybe a big pickup or SUV—had jumped the curb and punched a truck-shaped hole in the side of the building.
She peered inside the hole. It was dark. She used the light from her phone to get a better look inside. One of the filing cabinets was missing its third drawer from the top.
“Missing file drawer,” she called.
McVie was seething. “How the hell did this happen?” he shouted. “Our coroner gets killed, we can’t gather evidence for days, and as soon as we do, the whole crime scene gets compromised!”
Fenway stood there, not sure what to do.
“Who knew about this? Who knew you were going to look at those files today?”
“Besides you?” Her voice was smaller than she wanted it to be.
“Yes, dammit, besides me!”
“Um, everyone who was here last night. And the young officer who was watching over me—I don’t think I ever got his name.”
“Lana Cassidy?”
“I don’t know. She knew I was investigating Walker’s office, but I don’t think she knew I was going to look at those files. Whoever was in the evidence room where the keys were, probably. I assume the officer talked to somebody to check out the keys from the evidence room, right?”
“Who else?” McVie pushed.
“No one else.”
“Your dad?”
“No, I didn’t…” Fenway trailed off.
His head cocked to the side. “You didn’t what?”
“I don’t know. My father called last night, and he asked about the investigation. But I was purposely vague. I told him I had just started and I wanted to make some headway.”
“Did you tell him you were going through the files today?”
“I don’t think so.”
“You don’t think so?”
Fenway shrugged, crossing her arms. “I don’t know, okay?”
McVie paced back and forth. “Fenway, this is an active investigation. We can’t tell anyone anything that’s going on!”
“I know.”
He exhaled loudly. “I know you know intellectually. I know what you read in your textbooks. But out here in the real world, actually keeping your mouth shut about active investigations prevents shit like this from happening.”
Fenway looked down at the ground.
“This is a disaster.” McVie ran his hand through his hair. “I have to get a crime scene team in here. Probably from San Miguelito, even though they have a conflict of interest, but I don’t have a choice.”
He kicked at the ground. “I’m going to have to wake a lot of people up.”
“I can canvass,” she offered. “See if there’s anyone around who saw anything.”
“Come on, Fenway. Look at this place. There’s no one around to canvass. There aren’t even homeless people around City Hall. And it’s the middle of the night, in a sleepy little town. No one’s around.”
“Then I’ll go check the security footage. A truck, or something, plowed into the side of the building, and we’ve got security cameras, so we must have something on tape.”
“Knock yourself out,” McVie said, his tone softer, almost defeated. “I’ll be waking up a CSI team in the next county.”