You are here: Home / Fiction / Paranormal / The Reaper’s Kiss by Dale Ibitz 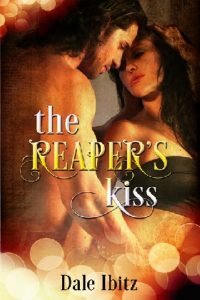 Haunted by painful memories, William turns to a world of sex and poison to forget his status as a shunned reaper with a sordid past. His strategy for survival is to fortify his emotional armor so no one will ever hurt him again, while trying to find redemption for his sins. Natalie, an exquisite human trying to save her sister from the horrors of the Other World, intrigues him. Though adamant she means nothing to him, her kisses reach into William’s soul and her silky skin is a slice of heaven. The damn woman cracks his protective shell. After learning the dark secret of Natalie’s past, how much will he sacrifice to save her soul?

The only thing Leah wants is a family and a place to call home. All she has is a target on her back because her daddy was an angel and her mom a human. Her anger has built for centuries as she goes on the run, hiding from a murdering goddess. Plotting revenge takes a village, however, and she might have to kill someone William loves to make him join her game. Will she exchange her hopes and dreams for a chance at payback?

Natalie needs William’s help to find her sister in the Other World. Her plan is to play him, deciding she’ll go as far as sleeping with the striking reaper if it’ll save her sister. Though his kisses bring on primal urges she’s never felt before, they don’t compare to the fire he ignites when he touches other parts of her body. Then she learns about his murderous past. Is she the one being played, left to die at another’s hand by the man she’s fallen for?

What Inspired You to Write Your Book?
I've had this weird fascination with the afterlife and what happens after death. One day I was wondering what happened if Death decided he/she didn't want to deal with death? After much thought, I came up with the idea of reaper-human hybrids who dislike their lives in the Other World, and strive to be human.

How Did You Come up With Your Characters?
I liked the idea of a reaper with good qualities, and an angel with naughty qualities. Three dimensional characters drive a good story, and I wanted a little bit of role reversal. William evolved as a man who wasn't genetically coded to be a harbinger of death (reaper), but life and circumstances drove him down a dark path; it's the good inside him that longs to atone for his past. One would think Leah, as the daughter of angel, is genetically coded to be good … but she's not. Last is Natalie, the human caught in the war between the reaper and the angel. But in my world humans are far from perfect, and Natalie has a few secrets tucked away in her past.

He glanced back down the alley where a reaper studied him before vanishing with a cackle. Oh shit. Just what he needed, a Giltine spy. The rat bastard was probably fading back to the Other World like a demonic tattletale that very second. Guess word about his junior Watcher bodyguard hadn’t reached the general reaper masses yet. Once it did, there wasn’t a reaper out there who would cross him.

Natalie shivered before sliding a glance behind her. He narrowed his eyes. She couldn’t have seen the reaper. It must be William’s own magnetic charm making her nervous.

Half-smiling, he leaned against the house. The little doll was proving too entertaining to leave just yet. He could spare five minutes of his time. “What’ll it be, doll? What are you willing to do for information?”

Pushing himself off the building, he strode the three steps to bridge the gap between them, moving so fast she stumbled back into the opposite house. He leaned his forearms on either side of her face, pinning her. Nectarine-scented heat leaped between them, making his muscles tremble. He was pushing the envelope, but this little piece was too tempting to walk away from now.

“Anything?” he murmured close to her mouth.

Her pink tongue slipped out and ran across her lips, mesmerizing him. He could taste her anxiety and physical attraction to him. Him. No fear of what he was, or what he could do. At least for now. How long before she ran just like the Abby? He let the weight of his stone heart fall, squashing all feeling for the last person to reject him.

She panted against him, her warm breath fogging his brain. He let the arousing sensation swirl around him for a moment, savoring the feeling, wanting to lose himself in her. What harm would one kiss do?
Thinking of his past, he knew it could do a lot.

Her gaze flitted between his mouth and his eyes. “You smell like ripe grapes being toasted by the sun.”

“You can smell that?”

He licked her ring, the warmth of her lips melting into his tongue. Moving past it, he traced her mouth before sliding inside. Heat exploded. She opened, their tongues gliding together. Hardening, he pressed against her. Her hands looped around his neck and her fingers trailed up his skin before burrowing into his hair.

She tasted wonderful, the alcohol on her tongue mixing with wintergreen. He deepened the kiss, tasting, stroking. Time ceased to exist. He ceased to exist. All that existed were Natalie’s scent, touch, warmth. She welcomed him in, making his jeans cause unbearable pressure against his thickening erection.

More. Rubbing himself against her, he fisted her hair and pulled her head back. He nibbled her exposed neck before returning to her mouth and easing more seductive heat from her tongue until she shivered.

Gods below, so warm, so good.

A loud bang snapped him from his daze. Shaking his head, he glanced over his shoulder. Hoots followed another round of pops as kids from the party lit firecrackers. He turned back to Natalie, caught in her dreamy gaze, trapped by the warmth binding them, stunned at the depth the kiss had reached.

She brushed her swollen lips. “Your eyes are glowing.”

Silent, he congratulated himself on his saintly control. Instead of skimming her soul, he’d simply enjoyed the kiss. Still, he was treading dangerous ground when it came to her scent and warmth. Next time he might not be so saintly.

He pushed himself away from her and snapped the rubber band. His dick was still hard, straining to break free and find a home in her soft body. Good. The tension in his pants gave him something to focus on.

He blinked. Was she talking about his boner? Under the right circumstances, he thought it was. “What?”

“When your eyes glow, is that a good thing?”

“It means I’m getting ready to reap.”

“You can take a soul before its time?” When he nodded, she asked,
“Isn’t that, like, stealing?”

“Have you stolen souls before?”

Why wasn’t she running? Her stubbornness incited his anger, because she would eventually.

One side of his mouth lifted in an easy smile. “Your five minutes are up. What else you have to trade?”

She rolled her eyes. “That kiss wasted my time. Now I deserve ten minutes.”

She blushed, her heat tickling him all over.

“Think again. I get ten minutes for putting up with your pawing because trust me, that kiss was nothing to write home about.”
He laughed. She could deny all she wanted; he knew when a woman was enjoying a kiss. “Whatever you say, doll, but we haven’t reached agreement. There’s one thing I really want, and if you agree, you get ten minutes.”

“What are you majoring in at that school of yours? Cluelessness?”

He snorted. “Just what the world needs, another bleeding-heart sap.”

Her jaw tightened before she responded. “Some people, especially kids, have no voice, no one to stand up for them. Surely even you with your limited ability to feel anything can understand that.”

He did, though he’d never admit it. “Sorry, doll, my heart doesn’t bleed for anyone but me.”

“You seem shocked. What were you expecting me to want from our bargain?”

“I don’t have to answer that.”

“No problem, I already know.” He couldn’t stop himself. He just had to rub against her one more time. “Disappointed?”

Though she rolled her eyes, she didn’t deny it. Backing off, he smiled.
“Hate to disappoint you, doll, but I’m not interested in you that way.”

He smirked and she blushed.

“Why do you ask so many questions?”

“I was born curious.”

Gods below, this chatty Natty was getting on his last nerve. “Because I’m almost two hundred years old and sometimes I just want to go into a bar and get a damn drink, is that okay with you?”

“Two hundred . . .” There was a brief hesitation before she said, “Wow, you look pretty good for an old man. You don’t look a day over thirty.”

“Thirty! I can pass for twenty-five.”

“Let’s split the difference and say you look twenty-seven and a half. What’s up with that?”

“When we reap, we ingest Giltine’s poison. It slows the aging process.” He didn’t add that stolen core-juice was like a youth elixir, and he’d ingested plenty of that over the years. Something she didn’t need to know. “Do we have a deal?”

“An I.D.’s a big order. For that price, you help me find my sister, not just tell me about your world.”

A growl built in his chest. “Forget it. If she wanted to be found by you, she’d be found. The Other World is no place to be poking your nose in other people’s business.”

The woman was a firecracker, igniting something inside him. Unable to resist, he pressed against her soft curves once more. Her temperature increased, alleviating some of the cold running through his blood.

Buy The Reaper’s Kiss On Amazon