You are here: Home / Fiction / Science Fiction / The Jump Journal by Douglas Corriveau 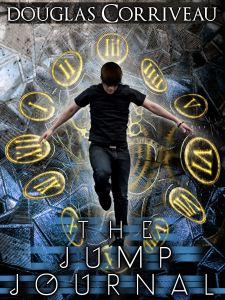 Time travel is a drug.

It’s taken four hundred years, but Ryan Mitchell finally understands that his power over the time stream is actually his addiction. His craving to time travel is what locked the year 2012 into its unending loop in the first place, but after centuries of torture, he’s desperate for it to end.

But withdrawal has sunk its cruel claws into him, and it’s not letting go. Every attempt to quit ends in disaster. The only thing worse than detoxing is the memory of Tara Matthews and the love he sacrificed for his addiction. Ryan has tried everything to put that painful past behind him. That is, until he discovers that she’s the key to his freedom.

Now Ryan must fight to win Tara back and finally escape the cycle. To do that, he’ll have to show her the real Ryan Mitchell: Student. Thief. Hero. Hermit. Heartbreaker.

What Inspired You to Write Your Book?
I wanted to do a unique take on time-travel, which is one of my favorite subjects. There’s so much literature out there about the mechanics of it, the paradoxes it creates, the trouble it always causes, but I’d hadn’t seen a lot about what a character might do if they suddenly found that they could jump through time at will, and I wanted to explore what having a god-like power would do to a person.

How Did You Come up With Your Characters?
I wanted a character that had that inner goblin that we all have inside of us, that thing that drives us to selfishness. When I started thinking about what I would do if I could time-travel, the results were terrifying. I knew I would abuse that power and would not be a better person for it, and I felt like I wasn’t alone in that. That’s what inspired me to write Ryan as a slave to his power and have him struggle with that weight.

Book Sample
Time travel is a drug. If everyone else could go back and fix their daily fumbles and flops, they’d realize that being perfect really is a matter of practice. But there’s a catch to this charmed living that no one understands: even perfection wants to be better.

Take a look at me. I’ve been as next-to-godliness perfect as a man can get. Well, “man” depends on your definition, I guess. Twenty years old falls somewhere between teenager and alcoholic, which is what I would be if I didn’t get kicked out of bars long before closing time. I know it’s terrible, but if you had lived my life, you would find yourself gazing at an empty fifth of Jack Daniels more often than you’d like too.

Groundhog Day, Back to the Future, that British doctor guy on TV, and all the other gaudy Hollywood notions of time travel leave me in stitches and soaked in my own heartbroken tears at the same time. Allow me to correct those fantasies. My name is Ryan Mitchell. Born: 1993. Current year: 2013. Age: 400 years old. And if you’re reading this, read fast. You only have a day to finish, best-case scenario. Confused? Or maybe you believe these are the ramblings of a lunatic. Either way, you’re right. I’ll explain.

Unlike you, I’ve got all the time in the world.

I could begin with the usual jargon, the backstory nonsense that all the vampire books and teen novels start with. I could tell you that I grew up in a normal household with Average-Joe parents in a sleepy Midwest town, living an apple pie American life. But it doesn’t matter what my background is. That actually is how I grew up, but the larger point here is that my old life, my first life, is fading fast from my memory. It just doesn’t matter anymore.

I’ll jump straight to it since I know you’re dying to hear about time travel, but you’re doomed to be disappointed. In 400 years, I’ve never met anyone else like me. I don’t know if it’s a genetic fluke, a gift from God, or a damn superpower, but as far as I know I’m the only one who can turn the world backwards. I’ve been doing it since last August, four centuries ago.

You read that right. The years 2012 and 2013 have been replayed more often than Green Day’s “Time of Your Life” at high school graduations. I’ve been 19 and 20 years old for 399 years longer than I should have, and it’s all my fault. It started during freshman orientation.

About the Author:
I was born and raised in not-so-rural New Hampshire. I drifted through three schools and two-and-a-half majors before figuring out that writing was his passion. Now, you couldn’t pay me to stop. I’m currently wrapping up his degree at Emerson College and hoping to have my next series published soon.

I love books of all kinds, martial arts (watching or participating), and superheros of all persuasions. I can’t stand manikins, though. Creepy. They’re like clowns, but with no faces and randomly amputated limbs.