You are here: Home / Autobiographies, Biographies & Memoirs / The Hotel Of Insanity by Ian James 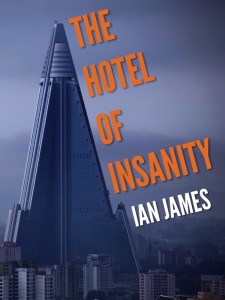 What inspired you to write your memoir?
Overcoming incredible adversity while living in South Korea.

About your Book:
Ian James is “amazing…truly a joy to read.”
— The Kindle Book Review

Have you ever wondered what it would be like to give up everything you know and move to another country? Have you dreamed of exploring new worlds and soaking yourself in foreign languages and cultures?

The following months are even worse. Gastroenteritis puts him in the hospital for days. Random elderly ladies approach him on the sidewalk and beg him to marry their daughters. The Busan Under-Office of Teacher Training—BUTT—sends him and hundreds of other unfortunates to The Hotel Of Insanity, located way out in the countryside, locking them in for the weekend and forcing them to sing and dance KPOP hits for assemblies of wildly-applauding Korean bureaucrats. Teaching English in South Korea was supposed to be crazy—but this crazy?

Can he make it through the poisoned air which reeks of sewage, the garbage-strewn sidewalks lined with prostitutes, the crushing eggcrate apartment blocks, the bizarre colleagues who force him to kowtow before nightmarish classrooms swarming with shrieking children? Or will Asia send him packing to the debts in America he was trying to escape?

How did you decide how to publish your book and where is it published through:
I decided to publish it through amazon.com because amazon has the most customers and is pretty easy to submit to. I also tried submitting to ibooks but the process was pretty convoluted and by the time they’d accepted me I no longer cared about them.

How do you see writing a Memoir as different from writing other genres of books?
It’s based principally on memory rather than imagination—trying to get details right as I experienced them while also protecting the identities of those involved, since truthful portraits require showing every wart that pops up in my recollections.

Author Bio:
I was born in New York City, but my family moved to Maine when I was six, and I graduated from Hampshire College in Massachusetts and not New Hampshire in 2009, just as the world economy was in free fall. Bitten by the travel bug after a two-week family jaunt in Italy a few years earlier, I decided to explore the planet, and after two months of job-hunting I found myself gawping at a public school classroom in Busan, South Korea, surrounded by thirty shrieking kids who were dancing on their desks and sticking their fingers up each others’ anuses.

I was a spoiled and naive scion of middle America, and meeting reality head-on in South Korea almost did me in. After a few months of culture shock a sudden bout of gastroenteritis sent me to the hospital for a weekend of hell, after which I called my mom in tears and told her I couldn’t bear the idea of riding the subway back to my lonely three-meter square apartment–complete with an amazing view of other cement apartment buildings–and that I was coming home. She said I should take a taxi instead, and so I did.

Things improved. I took a vacation in Indochina, met my wife in Busan, and wound up getting hitched six and not nine months before the birth of our first son, Harry Ulysses, who was followed several years later by his brother, Theo David, whom we affectionately refer to as Monster Number Two. By some miracle I got a job as a professor at one of the top Korean universities, even though I don’t have an advanced degree, which must mean I’m one of the youngest and least-qualified professors on Earth. After a lifetime of writing I started publishing ebooks on amazon.com. I love the art of storytelling, of exploring and exposing strange new worlds. I also take pictures, play guitar, and run, but since my kids are still pretty small I spend most of my time making sure they don’t grow up into dweebs.