You are here: Home / Bargains and Freebies / Bargain Books Under $3 / The Good Liar by Ann Elwood @aelwood

The Good Liar takes place in a time (1969) and a place (California) that give rise to a sense of something both magical and sinister existing on the other side of the veil of ordinary life. In that ordinary life, Vivian Shipley, who works for the Adventure Map Company, becomes entranced by the stories her boss, Richard Roche, spins about his life. Their own love story is wrapped up in the fantastic journeys promised in the maps they produce, the secrets Vivian discovers about her own family, and the tales Vivian and Richard tell each other, taking them both into territory neither has explored before.

At the La Brea Tar Pits.

. . . . I think how Los Angeles, uneasy, exists on a deceptively solid-seeming crust on which are houses, trees, freeways, bikers, wedding parties, cemeteries; that crust of earth precariously sitting on a tarry ocean, an ocean like some underground giant struggling for air and light, against the chains of time, its struggles reaching the surface only in quiet bursts of methane. But if it broke through entirely? And this little pit spread into miles of thick tar, engulfing everything—so the biker sank, even as he pedaled to rise, so the houses tilted and disappeared, so the bride and groom lost each other in darkness? All that reality gone, all those collective human years of reality, gone to tar. The breathing mammoth mounting his mate as she chews grass, gone to tar . . . 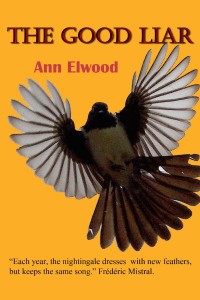 About the Author:
Ann Elwood lives in Cardiff-by-the-Sea, California, with six cats, a desert tortoise, seven box turtles, and a German shepherd, Louis. She teaches history part-time at California State University, San Marcos and writes the books she has always wanted to write but never had the time for.