You are here: Home / Fiction / The Friday Edition by Betta Ferrendelli 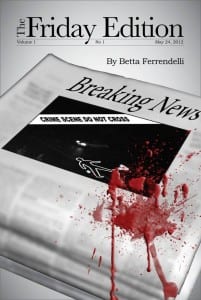 A beautiful young woman, who also happens to be a Truman County Assistant DA, tumbles from her apartment balcony to her death on Christmas Eve.

With alcohol and a suicide note found at the scene, police suspect suicide. When police are unhelpful, Sam begins her own investigation, starting with a covert entry into the DA’s office, where she finds evidence linking her sister to a drug case. Samantha throws herself into finding out what really happened to her sister. She pursues her sister’s killers, maneuvering through a minefield of intrigue deliberately set out to divert her from the truth. She invariably stumbles when confronted by the inescapable specter of a greater enemy: the alcohol dependency that has already cost her the respect of her peers, and, worse, custody of her daughter.

Samantha must summon the courage to face not only a cartel of criminals, but also her own demons. Physically threatened and betrayed, she nearly defeats herself through her own insecurities and fears. She not only must summon the courage to get beyond her own shortcomings, but she must work quickly to beat her nemesis – a reporter at the major metropolitan daily newspaper, who is also in close pursuit of the developing story.

Can Samantha ultimately prevail, write the biggest story of her career, get her daughter back and and finally begin to change her life before it is too late?

How is Writing In Your Genre Different from Others?
In this continuing series featuring journalist Samantha Church, there will also be “Reporter’s Notebook” entries.
Journalists typically use Reporter Notebooks to write down the actions and utterances of others they see as they cover their stories. When the reporter begins to write the story later, they turn to these notes to help them remember and capture what happened and what they saw and heard.
In The Friday Edition, my main character, Samantha Church, in addition to using her Reporter Notebooks in the traditional way journalists use them, she will also use hers as a journal of sorts. Though the story is told from multiple viewpoints, Sam will write her Reporter’s Notebook entries in the first person. Instead of telling the reader – her thoughts, feelings and emotions – in the first person, she is telling her notebook.
Each book in this continuing series will always conclude with Sam writing in her Reporter’s Notebook.

What Advice Would You Give Aspiring Writers?
The same advice I have always been given: don’t give up! Sounds so cheesy, but it is true.
I’d also like to add, don’t wait to get an office before you start writing, as someone I met at a writer’s conference once told me. You can write any where — I write at my kitchen table!

Author Bio:
Betta Ferrendelli has been an award-winning journalist since 1989, having worked at newspapers in Denver, Seattle and Albuquerque. She writes professionally today for an international heathcare magazine. She published her first ebook, The Friday Edition, July 2012.