You are here: Home / Autobiographies, Biographies & Memoirs / The Forests I Called Home: A Memoir of Living, Leaving, and Loving the Woods and Sea by Jodi Auborn 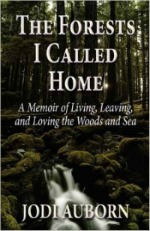 What inspired you to write your memoir?
I was inspired to write my memoir from my life growing up in the Adirondack Mountains, and the other places where I’ve lived and vacationed. I was also inspired by my childhood pets and camping trips that influenced my life and made me who I am today.

Shortly after my first novel, “Stormwind of the North Country,” was published, my publisher sent e-mails to their authors saying that they were seeking memoir manuscripts. I wondered if I should bother to write a memoir, since I was only in my early thirties, and not famous. Why would anyone want to read about my ordinary life? However, I realized that even if strangers weren’t interested in it, a memoir could make a nice Christmas present for my family. I decided to write it and focused on my favorite places and pets. After the book was published, I was pleasantly surprised that it has enjoyed many sales in my local area. It’s even gotten me in touch with the person who bought my beloved childhood home, a place that played a big part in the story!

About your Book:
Growing up, the author always knew she was an unusual child, a tomboy and loner who daydreamed about living in the wilderness. When she was ten years old her parents built a log cabin in the forest, which she explored with her rowdy but loveable dog, Rocky, and faithful horse, Sally. Those years sparked a fascination with the natural world, and a search for a place to belong. Her travels took her from the Adirondack Mountains to a remote island in Maine, and to the coast of Cape Cod, where she lived in a campground with her pet ferret, Riptide.

This is a story of growing up feeling different from the rest, and of solitary journeys that strengthened the author’s faith in God and sense of self. It’s a celebration of the special places that make us who we are, and of childhood dreams that come true in surprising ways.

How did you decide how to publish your book and where is it published through:
The book is published through America Star Books, a small-press publisher. Since I had already done business with them, I decided to have them publish my book.

How do you see writing a Memoir as different from writing other genres of books?
I discovered that writing the memoir didn’t allow me as much freedom as I had felt when I was writing my novels about imaginary people. Furthermore, even though the story is non-fiction, writing it was much different from writing other non-fiction pieces. After all, the subject matter was about myself and my family, not some impersonal subject that I would have written about in a high school report or college term paper. Though I wanted to honestly describe my life experiences, good and bad, I didn’t want to embarrass my family by going into personal details and writing a negative “tell-all” book. For that reason, I thought that the trickiest part was deciding what should be written, and what should not. Although the book contains some painful and bittersweet memories, I tried to focus on a sense of hope for the future, and trust in God throughout the bad times.

Like the main character in “Stormwind” and “Secrets,” Jodi grew up in a small town in the south-eastern Adirondack Mountains of upstate New York. She could be often found canoeing on the local lake, or hiking and horseback riding on the country roads and woodland trails. She describes this in her memoir, “The Forests I Called Home,” published in 2011.

Her writing took a different turn in 2013 when she began writing “Matthias: The Ghost of Salvation Point,” a children’s novel set at a haunted lighthouse in Maine. “Matthias” was printed through CreateSpace Independent Publishing and released in 2015.

Jodi is happily single and lives in Ticonderoga, NY, with her dog, two cats, ferret, and very old horse. In the winter she is employed as an apple packer at a local orchard. Come summertime, she works at the same Adirondack campground where she spent many childhood vacations. Her hobbies include reading, drawing, designing houses, camping and hiking, canoeing and sailing, horseback riding, gardening, cross-stitch sewing, and music. She also enjoys vacationing in Cape Cod and the coast of Maine.