You are here: Home / Fiction / Mystery/Suspense / The Closet (Summerset Tales #1) by Jac Wright 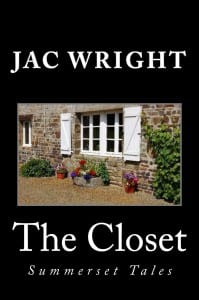 Love is a battlefield. Who will get out of it alive?

Harry Duncan Wood runs a hotel in the historic city of Bath with his beautiful young wife. When he falls in love with Mill House, an old greystone farmhouse on the banks of river Avon among the soaring hills of Somerset, and sets about moving his family there, the first appearances of the cracks in the marriage take him by surprise. Is his wife seeing another man? Duncan needs to get to the bottom of the affairs for his own sanity. Sometimes, however, ignorance is bliss and will also keep everybody alive.

Jac Wright is a published poet, a published author, and an electronics engineer who lives in England. The Closet is the first in Wright’s collection of literary short fiction, Summerset Tales, in which Wright explores characters struggling against their passions and social circumstances in the contemporary semi-fictional region of England called Summerset, but with an added element of suspense. The collection is published serially in the tradition of Charles Dickens’ The Pickwick Papers and Thomas Hardy’s Wessex Tales. The first Summerset tale, The Closet, accompanies the first title in the author’s full-length literary suspense series, THE RECKLESS ENGINEER, published by Soul Mate Publishing, New York.

How is Writing In Your Genre Different from Others?
I write 3 series: poetry, literary short fiction series, and full-length literary fiction sereis. Each is different. The shorter the works, the more difficult it is, because you have to have great skill to be able to develop your characters and the situation to make an emotional impact within the given limits.

What Advice Would You Give Aspiring Writers?
Read a lot.

Author Bio:
Jac Wright is a published poet, a published author, and an electronics engineer educated at Stanford, University College London, and Cambridge who lives and works in England. Jac studied English literature from an early age of three, developing an intense love for poetry, drama, and writing in Speech & Drama classes taken every Saturday for fourteen years, and in subsequent creative writing classes taken during the university years. A published poet, Jac’s first passion was for literary fiction and poetry writing as well as for the dramatic arts. You will find these influences in the poetic imagery and prose, as well as the in the dramatic scene setting and deep character creation in his writing.

These passions – for poetry, drama, literary fiction, and electronic engineering – have been combined to create the first book in the literary suspense series, The Reckless Engineer. There are millions of professionals in high tech corporate environments who work in thousands of cities in the US, the UK, and the world such as engineers, technicians, technical managers, investment bankers, and corporate lawyers. High drama, power struggles, and human interest stories play out in the arena every day. Yet there are hardly any books that tell their stories; there are not many books that they can identify with. Jac feels compelled to tell their stories in The Reckless Engineer series.

Jac also writes the literary short fiction series, Summerset Tales, in which Wright explores characters struggling against their passions and social circumstances in the semi-fictional region of contemporary England called Summerset, partly the region that Thomas Hardy called Wessex. Some of the tales have an added element of suspense. The collection is published serially in the tradition of Charles Dickens’ The Pickwick Papers and Thomas Hardy’s Wessex Tales. The first tale, The Closet, accompanies the first title in the author’s full-length book, The Reckless Engineer.

What Inspired You to Write Your Book?
SUMMERSET TALES is the edgar nominated author and published poet Jac Wright’s serialised literary short fiction collection in which Wright explores characters struggling against their passions and social circumstances in the semi-fictional region of England called Summerset, partly the region that Thomas Hardy called Wessex. Wright writes of comtemporary life in England and seeks to create a collection of serialised literary fiction to paint a colourful portrait of English society in the times that we live along the traditions of Geoffrey Chaucer’s Caterbury Tales, Thomas Hardy’s Wessex Tales, and Charles Dickens’ The Pickwick Papers. Some of the stories – including the first story in the series, The Closet – also carry an added element of suspense.