You are here: Home / Fiction / The Big Crunch by Medeas Wray @MedeasWray 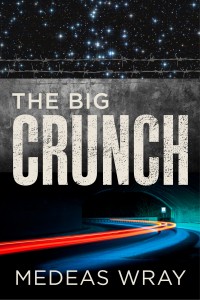 Malkie is a games inventor and computer graphics designer whose life is starting to mirror one of the games he invents. Terrible things are happening around him: computer crashes, a failing marriage and a mysteriously totalled car. Not helped by the man himself. He’s newly into astronomy, habitually into alcohol and has a strange geeky assistant called Ian, an ex-hacker with a couple of murky associates and a flat at the low-rent end of the neighbourhood where Malkie mis-spends a few of his nights. And then it all starts going wrong.

What Inspired You to Write Your Book?
The Big Crunch is set In Leeds, a big city with its own set of problems – living here you get to hear all kinds of rumours and somehow the various strands got brought together in a work that I hope, has much humour and laughter in it (and hope) as well as dark themes, shady deeds, a little violence and bad language. I wanted the book to be understood and liked by people living around me – and my early readers, just those people seem to have warmed to it, which in itself has been a major experience for me.

How Did You Come up With Your Characters?
I worked in all kinds of media for years and had come across many characters, from the flamboyant, extrovert types to the mysterious loners that were difficult to get to know. It’s perhaps easy to spin tales about both types.

About the Author:
I’ve been a professional writer, copywriter, scriptwriter and editor for a number of years – have travelled a lot and lived in big cities in England – and have also worked as a pizza-deliverer, painter and decorator, have waited on tables etc etc and when I wasn’t busy working, I wrote. I came up with a handful of short stories initially (The Big Crunch itself was once a short story), then decided to try my hand at writing a longer work, encouraged by another writer friend. I’ve now published Jabberworky & The Other Odd Story on Amazon/Kindle – an anthology of a humorous medieval tale told in six chapters with a ghost story and another odd story included. The Big Crunch is the first work I published – a shortish novel of just 70,000 words. My latest novel is Down To Zero – it’s a gritty crime thriller, set in London 2018 and featuring two seasoned murder detectives Mallory Vine and Bob Dario who over the course of their investigations start to find evidence of the paranormal at work, evidence they can’t refute. It’s the first in what I plan to be a series – the second one, that I’m working on now, is probably going to be called The Off-Comers and there may be a third…or…