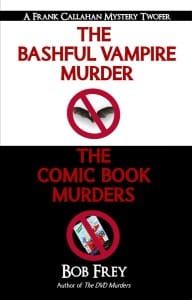 Double your pleasure, double your fun with a Frank Callahan Mystery Twofer. Frank Callahan is a gay LAPD detective who first appeared in the free-for-all mystery, The DVD Murders. He and his long-term friend and partner, Detective Barry Jennings, are back in two contemporary crime fiction stories that will keep you guessing all the way.

The Bashful Vampire Murder begins where most vampire tales end: in the apprehension of a vampire hunter right after he has driven a stake through his quarry’s heart. The defense attempts to prove that vampires exist and the homicide was justified. To Callahan’s horror, the trial ends in a hung jury. Only the resourcefulness and savvy of the tough cynical detective stand between justice and the killer being allowed to walk.

In the Comic Book Murders, the two flatfoots run the gamut of superhero and villain suspects, from Captain America and the Caped Crusader to the Joker and Firebug until outstanding police work and dogged persistence lead them to the unlikely killer. On the way, we get to visit a kinetic comic book convention, the backstreets of Hollywood, and a firebombing in Westwood on Halloween eve.

How is Writing In Your Genre Different from Others?
I try to bing a little extra to the mystery or crime fiction genre. The DVD Murders was not just a mystery novel but a homage to classic movies. The Bashful Vampire Murder & Comic Book Murders intrudes upon the paranormal.

What Advice Would You Give Aspiring Writers?
Get all the advice you can get, let it stew and go with your own gut feelings. If you self publish, get a good editor, proof reader, and illustrator for the cover.

Author Bio:
Bob Frey loves to entertain, make people laugh and think, and, perhaps, shake them up a little. He was a copywriter for several top Los Angeles advertising agencies and received several awards for his creative work. When he turned to writing fiction, he found it was a whole new ballgame and he had a lot to learn. He has since published a couple of mysteries, The DVD Murders and The Bashful Vampire Murder & Comic Book Murders, and Catawampus Tales, a book of short stories, a mixed bag of fast food for the mind.

Also an actor, he has appeared in some forty independent films and stage plays. Now retired, he lives in Sandy, Oregon, with his wife, Susan.

What Inspired You to Write Your Book?
It was an idea that was kicking around in my head for a long time. What if a vampire hunter did kill a vampire and was caught? What would be the cosequences? The Comic Book Murders is such a obvious idea for a book, I wondered why it had not been done before.