You are here: Home / Fiction / Science Fiction / The Army of Light by Stephen Fender @StephenAFender 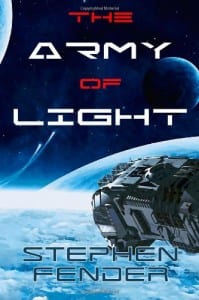 It started with an attack on a research station near the frontier region, the furthest portion of the Outer Sphere of Unified space. Then, one by one, subsequent border systems began to fall victim to the unknown attackers. Months went by before anyone in the Unified Collaboration of Systems realized what was happening. By then, it was too late.

The fighting between the two factions raged on for nearly five years. Hundreds of thousands perished, and millions of innocent beings lost their homes.

Then, nearly as quickly as the war had started, the Kafaran’s inexplicably retreated to an unexplored region of space. Even with their once expansive foothold in the Milky Way now lying in ruins, it seemed to the once peaceful UCS that victory was finally theirs. Now, it was time to rebuild.

With the Galactic War now five years in the past, former fighter pilot Shawn Kestrel wasn’t nearly as content in his peacetime life as he could have been. Not only was his fledgling cargo business steadily losing customers, his lone interstellar transport was fatally incapacitated, the victim of a now all too common pirate attack.

Without warning, the prudish daughter of his former commanding officer appears, informing Shawn that William has mysteriously disappeared—apparently the victim of foul play. And, as if things weren’t difficult enough, a Unified Sector Command carrier quickly arrives to assert the Unified government’s own self-guided interests into the disappearance.

As Shawn endeavors to put all of the pieces together, one thing becomes terrifyingly clear: the Kafaran are no longer idle.

With the government suspiciously pressing down on him from one side, and the beautiful and enigmatic daughter driving him on from the other, Shawn Kestrel must search deep within himself to decide where his past and present loyalties lie before the universe once again erupts into all-out war.

How is Writing In Your Genre Different from Others?
I love my characters—from the lowest Ensign to the Admiral of the Fleet, from the janitor (I don’t think I have one of those…may need to fix that) to the President of Unified space. Every one of them is a part of me, or someone I know, or an actor/actress that I’ve studied intently. I try to make them as absolutely real as possible so readers will relate to them as living beings, not robots that would never be able to operate outside of the confines of the world I’ve placed them in. They have pasts, presents, and foreseeable futures…and I try to not let it overpower the underlying story. I feel that’s unique among authors, and I fervently believe that readers love it.

What Advice Would You Give Aspiring Writers?
Tell the story you want to tell, not the one you think readers want. If you are passionate about what your doing, it will show through.

Author Bio:
I was born in Los Angeles, California and raised the city of Lancaster, which sits at the northern-most end of Los Angeles County. The son of a second generation deputy sheriff, I spent several hours each week after school (both grade and middle) at the local library, where I’d wait for my dad to get off work and drive me home. During those hours I would immerse myself in archived copies of Starlog Magazine (nearly every issue published between 1976 thru 1990), where I’d read the behind the scenes exploits of my favorite science fiction movies and television series. In high school I was highly active in art, sometimes taking as many as three art classes per year. My junior year I enrolled in journalism, where I produced a great many articles for the Opinion page. That’s when I really got bitten by the writers bug.

After high school I joined the US Navy as a computer technology specialist, working on the west coast with an anti-submarine and scouting squadron, and later on the east coast onboard a guided missile cruiser as part of the Enterprise battle group. During deployment to the Persian Gulf in 1998, I was offered given a Star Trek book to read (to help fill my addiction to science fiction). It was, in my opinion, a very poorly written work. Telling my friend this, he challenged me with “Well, then write your own and I’ll let you know.” That’s was all it took. I punched out a 70k word fanfic novel in less than three months, which I had to print out on an old LaserJet to give back to my friend. The novel made its way around the boat, and I was soon heralded as an “up and coming writer with lots of potential.” Needless to say, for it being my first work written in excess of 5,000 words, I was stoked,

Afterwards, life got busy—as it usually does—and I didn’t pick up the pen for another five years. I started dabbling in 2009, then decided to produce a few more fanfic novels to get back into the habit of writing. Although largely unedited, they received high praise from the Star Trek fanfic community. I took the skills leaned in those exploits and produced my first published novel, The Army of Light, in June of 2013.

I still work with the Navy, now as a civilian. When not working I divide my time between hanging out with my wife, writing, or tinkering out in the garage or playing my guitar.

What Inspired You to Write Your Book?
My love for science fiction from a young age.