You are here: Home / Fiction / Stage Five by Robert Brumm 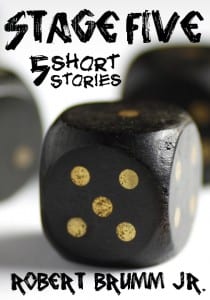 Warning. May contain traces of the following:

Talking cats and dogs, a serial killer on dialysis, testicle dissecting robots, prostitutes getting shot in the back, a meth head burned alive, a decapitated head kicked across the room, a puggle tempted to eat fresh vomit, a woman with a hangover wearing a Reggie White t-shirt, a pink litter box, and the extinction of the human race.

A Blog Named Phil – Visit Phil’s blog to read his account of the day his dog and cat started talking to him. Yes, it happened to everybody but read it anyway. Phil’s a lonely guy.

Cooper – Having to kill a gum snapping prostitute, a knuckle cracking beefcake, and a twitchy meth head was just the start of Cooper’s bad day. When he gets teamed up with Vinnie Smalls, a razor wielding pain in the ass wise guy, to collect a debt, the night goes from bad to bizarre to deadly.

Stage Five – After a usual night of binge drinking and television watching, Amy finds herself locked in the basement cell of a serial killer the next morning. Her death seems certain until the killer realizes he may have picked the wrong woman to be his next victim.

We Called Them Sheen – They started out as personal assistants, butlers, nannies, and companions. They ended up being responsible for the extinction of the human race.

She Must be a Daisy – One cat and one man in an apartment. One dies. The other tries to survive.

Author Bio:
Robert Brumm Jr. lives in Southeastern Wisconsin with his wife and two children. He can be found during the day slaving over a hot server as a systems administrator. At night, if he’s not drinking beer in front of the television or taking his puggle for a walk, you just might find him writing in the basement.

What Inspired You to Write Your Book?
I decided to pull together a handful of short stories I’ve written and publish them together as one book.