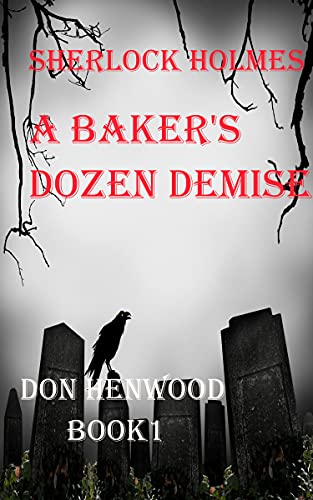 Sherlock Holmes is facing his greatest nemesis, and the clock is ticking. Twelve victims; what’s the connection? Scotland Yard dragged their heels and only now elicited the great detective’s help. But is it too late? The gong is about to strike.

What Inspired You to Write Your Book?
The love of reading the original Sherlock Holmes stories by Conan Doyle. This trilogy started with book two during the great hiatus/ the missing three years in Doyle's writing. Book one steps back to see how Holmes encounters the killer.

How Did You Come up With Your Characters?
These are two of the most well-known character in writing. Sherlock Holmes the consulting detective, and his associate Dr. Watson. Anthony Colton: the serial killer is a composite of many psychopaths throughout history.

A notebook in my lap now contains the essential details of our latest adventures. Closing the book, Watson put his Dixon pencil back into his breast pocket and saw Sherlock Holmes staring out the window into a featureless dark landscape as our train travels through the open country between Bristol and London. The hour was late, and there was little to distract ourselves outside the window. Holmes had spent most of his time in the dining car, but he had returned when a party of men became too noisy over a game of cards. Watson could see he was still restless.
“Holmes, it’s been a long day. I could dim the lighting if you would like to attempt to sleep,” said I.
“No, thank you, Watson. My blood is still up, and sleep would be impossible.” He stood and shrugged on his coat. “I think I’ll have a smoke between cars. The fresh air will do me good.” He left without inviting Watson to join him.
By the time Sherlock Holmes had returned to their compartment, Watson had stretched out on one side of the benches with the lights dimmed just enough for Holmes to settle in when he had come back.
“I’m not asleep if you want to talk,” Watson said from under the hat covering his face.
“Thank you, but that’s not necessary. We’re only about an hour out from Kings Cross Station. I will wake you when we arrive.” Holmes dimmed the lights further and sat by the window on the other bench.
Watson peeked out from under his hat and saw Holmes’s silhouette like a black marble statue.

An insistent knock woke me from my pleasant slumber. A dream, now fading into the mist of consciousness. My eyes still closed, willing the intruder away.
Rap-rap-rap, the knock invades again with an all too familiar voice, “Watson. Watson. Are you awake? I need to speak with you.”
Watson opens his eyes to a darkened room; the drapes were drawn tight. It felt as if he had been sleeping only a few minutes. His limbs were leaden and sore from traveling.
Sherlock Holmes and Watson had just returned this very evening from a harrowing case that took us to Bristol. Their weeklong pursuit led them from the city’s cultured center to the rough and dangerous wharves along the River Avon. But they accomplished their mission with the return of the Eastern Orthodox religious Icon owned by the Isambard Brunel family.
Upon their return, and, as often as it was his tradition, Holmes lit a warming fire in the sitting room and found comfort in his fireside chair with his pipe in hand. But Watson felt near exhausted and said good night to Holmes then, retired to his room to catch up on a much-deserved rest.
“Watson.” Holmes’s voice rose with renewed urgency.
“Give me a minute, Holmes,” said Watson, as he threw off his covers and hung his legs over the edge of the bed with feet hitting the cold bare wood floor. While still in the dark, he could hear footsteps moving away from his bedroom door to other parts of the apartment.
The chilly floor sent a shiver up his spine before he could find the slippers with his toes prodding the length of the bed. Then wrapped himself into a robe that hung on the footrail. Watson’s hands fumbled blindly for the box of matches on the bedside table, and when found, lit the single candle in its stand. There was not a hint of daylight filtering through the drapes to give him a clue of the hour. A sigh escaped involuntarily, sensing the hour was still pre-dawn.
Why did Holmes wake him at such an ungodly hour? Truth be known, this wasn’t the first time he had roused Watson from a deep sleep. Sherlock Holmes wasn’t a respecter of civilized time. He lived in his own world, with his own rules. To be his friend, one had to adapt to his lifestyle and respond to his beck and call at the most un-opportune of times or circumstances.
Watson left the dark cocoon of his bedroom only to find the sitting room empty. Holmes was nowhere to be found. “I’m up,” Watson called out, turning to look at the Swedish grandfather clock — it was a present from the House of Bernadotte. (A scandal averted by Sherlock Holmes’ investigative talents). The hour hand was pointing at the Roman numeral two. Watson could not help but yawn at the realization.
“Holmes,” he said with a bit of ire in his voice. “You’ve awakened me in the middle of the night and now leave me to stand here and wait?” his hands were set on his hips like a scolding mother, but no witness to be seen.
“Sorry, Watson,” Holmes says as he came out from his bedroom door. “I need to have a word with you.”
“So you say. I think I’m awake enough to converse.” Watson notices Holmes was clothed. “Dressed already, Holmes?” he asked.
“Never undressed, Watson. I just now returned. While you slept, I was called away.” Holmes’s voice was bright and alert.
“Lestrade, I asked?” expecting no relief from the demands put upon by Scotland Yard.
“No, nothing so interesting. It was a message sent from the Diogenes Club. Mycroft had requested a meeting with the greatest of expediency and had sent a coach to be at the ready.”
“Must be serious,” Watson said.
“Nothing of the sort,” said he.
Sometimes Watson felt like getting Sherlock Holmes to answer his questions was like pulling teeth from the jaw-bone. And at other times, he’d ramble on like an incoming tide that couldn’t be held back.
Watson asked, somewhat exasperated, “Then why the early summons, Holmes?” another yawn escaping with his jaw wide open.
“We must pack at once. There is no time to waste,” Holmes said.
Watson stretched out a kink in his neck. “If that is what you wish. I’ll have my bags packed shortly. But can you give me an idea for how long?” Watson’s friendship with Holmes never questioned the sanity of his requests but was often left in the dark about the details.
“Three weeks at the minimum. We sail later this afternoon,” Holmes said, turning back to his room at a swift pace to continue packing. “There is a carriage waiting at our doorstep. Now hurry.”
Left with limited information, Watson packed comfortable traveling attire, assuming they would spend most of their time on trains and multiple forms of carriages. And all too often, traipsing through bramble and brush, regardless of the weather.
***