You are here: Home / Fiction / Seems Like Old Times by Joanne Pence 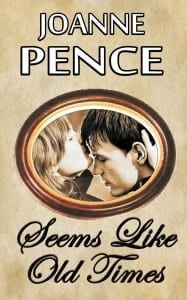 Growing up, Lisa Reynolds was expected to be “perfect” in everything she did from grades to career to the calibre of the men in her life. She denied her own nature, her own heart, to be what everyone else wanted her to be. But despite the perfection Lisa protrayed to outsiders, the state of her home life was ugly.

Tony Santos had been a major league baseball player but now finds his days of glory are gone. He’s back home to raise his son as a single dad. As a teenager, he loved Lisa, but to her, the poor son of a Mexican ranch hand could never be more than a friend. Yet, he was the one person who understood and accepted her as she truly was. He never forgot her, but also never forgave her.

When Lisa, who is now known as “Lee” Reynolds, nationally known TV news anchor, returns to her home town to sell her deceased mother’s home, she never expects to find Tony there.

Both of them have changed a lot. Yet, being with him, she finds that in her heart, it seems like old times….

Joanne Pence was born and raised in San Francisco and now makes her home in the foothills of Boise. She has been president of the Boise chapter of Sisters in Crime, a founder and board member of the Popular Fiction Association of Idaho, and founding member and current board member of the Idaho Writers Guild. A graduate of U.C. Berkeley with a master’s degree in journalism, Joanne has written for magazines, worked for the federal government, and taught school in Japan. She is author of the Angie Amalfi mystery series, which has 14 books and was published by HarperCollins. She is also author of novels in the genres of historical fiction, contemporary romance, romantic suspense, fantasy, and—coming soon– a paranormal thriller set in Idaho.