You are here: Home / Non-fiction / Humor / Screaming in Paris by Brian Lageose 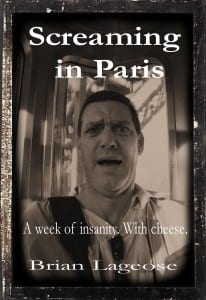 “Once upon a time, an extremely dysfunctional family decided that it would be a splendid idea to take a trip to Paris. In past adventures, this family had been unsuccessful in simply visiting their local grocery store without potential incarceration, so the prospect of descending upon another country should have sounded alarm bells. It did not. The family happily made reservations and purchased tickets and packed suitcases. And then they headed for the airport.”

Thus begins the eye-opening tale of what can happen when a group of relatively-decent people is dropped into a foreign land, under the supervision of a somewhat-neurotic leader who would much rather be doing anything else other than leading. It’s fair to say that neither the family nor the country of France was prepared for this expedition. Harsh words have since been spoken, and certain legal restrictions are now in place to hopefully prevent the particular chain of events that led to this family nearly losing their collective minds in the City of Love from ever happening again.

Despite the litigation and the finger-pointing, the family, overall, had a smashing time during their Sojourn on the Seine, and they fervently hope that other families and adventurous friends and domestic partners take advantage of France-focused travel opportunities. Still, there are certain things that potential participants in the Parisian Parade should know, if only to prevent that startling moment when your own family turns against you and hurls your annoying ass off the top of the Eiffel Tower.

In the interests of providing the right cautionary notes to the unknowing public, the family turned to the one person who had reminded them daily during their week in Paris that performance expectations were not being met: Beaumont, the anxiety-riddled tour guide during their Week of Infamy in a Land That Was Not Their Own. “Tell the people what they must know about how to behave properly in a country where you don’t understand the language!” they exclaimed, waving lit torches they had found on an abandoned set from Survivor: Loire Valley.

Actually, no one exclaimed or waved anything, yet Beaumont presumed that they did, because he has unresolved issues. He was quite enthralled by the opportunity to put pen to paper and vent about how his family nearly destroyed his sanity in the span of seven days.

And this is his story…

Brian was born in Tulsa, Oklahoma on a cold January day in 1965.

Clearly, the odds were already against him.

But he persevered, slugging through this and that, and he quickly learned at a very young age that some people can achieve greatness with dedication and hard work, some people are destined to awe the world with their ineptness and lack of admirable qualities, and most people are quite happy to simply plod along in the middle, leading pleasant but mundane lives where they occasionally find a stash of misplaced quarters under a sofa cushion and everybody gets to go out for ice cream.

Brian was not impressed with any of these options. He looked up from his paperwork at the Life Goals Development Center, and studied the applicants around him. Everyone else was quickly selecting one of the three avenues, shoving their completed forms at one of the bored administrative people, and then rushing out the door, because “Charlie’s Angels” was on TV in a few minutes and you couldn’t really miss THAT.

In frustration, Brian turned over his application, intent on writing a scathing missive to Whoever Was In Charge that he really didn’t appreciate the skimpy menu of opportunities, and he noticed a fourth career path, hastily scribbled in by someone with vision: “Some people feel compelled to study the world and people around them, and then stay up all night writing down their thoughts on the matter.”

Brian smiled, checked the box, and added his signature with a flourish. And so it began.