You are here: Home / Fiction / Sands of the Solar Empire 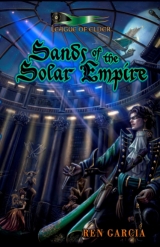 That’s all Paymaster Stenstrom, the Lord of Belmont-South Tyrol, has to do and the old warbird Seeker is his. He has dreamed of captaining a Fleet ship his entire life.

Little does Paymaster Stenstrom realize that he is in the grip of an old Vendetta and the short trip to Bazz might very well be his last.
Faced with a dead ship and a lost crew, Paymaster Stenstrom finds help in the strangest places: the thief Marine and the milquetoast young man from the Admiral’s office, and, though he just became acquainted with these two strangers, he discovers they have been influencing each other’s lives for a very long time.

Something sinister hovers over Paymaster Stenstrom and his two new friends, something they are only now becoming aware of. The SANDS OF THE SOLAR EMPIRE stretch out before them in an endless gulf brimming with the unknown. Can a masked Paymaster, a thief, a coward and a once great warbird face what awaits them?

Ren Garcia is a Science Fiction/Fantasy author and Texas native who grew up in western Ohio. He has been writing since before he could write, often scribbling alien lingo on any available wall or floor with assorted crayons. He attended The Ohio State University and majored in English Literature. Ren has been an avid lover of anything surreal since childhood, he also has a passion for caving, urban archeology and architecture. His books are published by Loconeal Publishing and include: The League of Elder: Sygillis of Metatron, The Hazards of the Old Ones, The Dead Held Hands, The Machine, and The Temple of the Exploding Head. LoE Book VI: Sands of the Solar Empire will be released in July, 2012. He currently lives in Columbus, Ohio with his wife, and their four dogs.