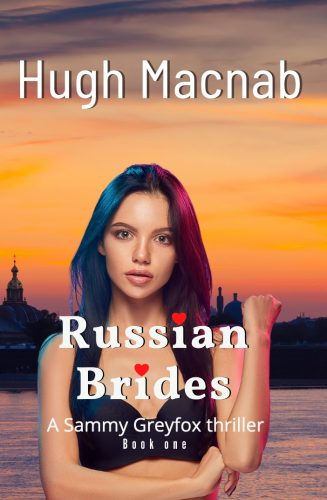 An utterly addictive page-turner that will keep you reading through the night. You will not see the end coming

An internet service is introducing wealthy Floridian retirees and beautiful Russian women. Everyone seems happy – until the retirees start dying.

A mass grave is excavated in Collier State Park, revealing the bodies of newborn babies – each unspeakably mutilated.

Detective Sammy Greyfox from the Sheriff’s Office in Naples, Florida, becomes involved in both investigations as she unravels a deadly tangled web of chilling evil which will haunt her forever.

In her confused personal life she has to fight her own menacing Demons. Demons which may want her to take a life.

In the end, she will face a race against time to prevent another child’s death. But will she be in time? And will she survive the consequences?

What Inspired You to Write Your Book?
I wanted to achieve two new things. Create a new American Native American female Detective, and write in the first person for the first time. Buy doing this, my intention is to let the reader see what my female sleuth sees while experiencing the day to day happenings in her personal life. To feel what she feels and to unravel the crime in real time.

How Did You Come up With Your Characters?
Sammy Greyfox, raised on the Seminole Reservation in Florida. An underprivileged upbringing, but a studious learner, helped by her ex military uncle. Her childhood experiences shape her wish to 'serve' and she starts her career with the Miami PD.
Her adversary must remain mysterious or else the story will be revealed, but there is plenty of choice. A combat-hardened ex-marine, a multi-millionaire real-estate broker and the owner of an online international website offering rich Floridian men, attractive Russian Brides.

Book Sample
Six am and Alexa wakens me with the Beatles Greatest Hits. I shower, tie my hair back in a ponytail, and throw on the running gear. The new shoes I need will have to wait until next month. I pack the detectives shield and gun in my backpack, grab an OJ from the fridge and head for the door.
Stop. Back up. I’ve forgotten my daily ritual – the bones.
Back in the minuscule kitchen, in my minuscule apartment, I lift the small wooden box and admire the engravings as I always do. So intricate. The Sun and the Moon both shining on a fox. My full given-name ‘Sun and Moon Greyfox’. I go by Sammy.
I open the box and remove the bones. There are four. Some of our people believe they represent elements of Earth, Wind, Rain and Fire. But my Papa told me they are Man, Woman and the spirits of Good and Evil. I roll them onto the worn kitchen worktop. The bones tell me it’s going to be a stormy day. I expect rain and wind. I’m wrong. The stones are right.
Twenty minutes later, I park my clapped-out dusty Chevy in the usual spot at the rear of the Sheriff’s Office and carefully lock it. It may be clapped-out garbage, but it’s my clapped-out garbage, and it’s all I can afford thanks to my crippling education loan-repayments. When I’m in a better mood, I call her my trusty steed. Today, she’s garbage. I haven’t had my run yet.
It’s still early so the sun’s up, but the heat hasn’t yet started to burn. The summer in Florida is a bitch. They forecast today to be a hundred-five. Shade will be at a premium.
Strapping my backpack firmly in place, I set off across Goodlette-Frank heading towards the coast. I’m running smoothly today, not working on anything specific, just exercising. It takes fifteen minutes to hit Gulf Shore and head south, five more to get to 5th and head back east. I’ve created half a dozen different routes I can run depending on what I want to achieve. Today, I’m running an easy loop and within ten minutes I’m back across Goodlette-Frank and pulling up outside EJ’s Bayfront cafe.
Although I’ve been running easily, I’m bent over, leaning on my knees when I notice the car. It’s nothing special. Just an SUV with dark tinted glass like half the cars in the carpark. But it’s not parked. At least it’s not parked properly. It’s sitting across two other cars and idling, waiting. I assume someone is inside collecting food to go.
At that moment a woman exits EJ’s with a handbag slewed across her shoulder, a coffee in one hand and a croissant in the other. She’s dressed casually in Nike trainers, blue denim shorts and a plain white T-shirt. There’s a gap revealing a flat stomach. She works out. I think this is who the car’s waiting for, but it isn’t. She turns the wrong way, in fact she doesn’t even see the car. I do. I’m standing up now and paying attention. Something’s wrong.
She walks towards me and starts crossing the car park. The SUV moves. Slow at first, as if eyeing its prey, then suddenly it speeds up just as the woman is in the middle of the pedestrian crossway.
I move fast and hit the woman above the waist with all of my one-hundred-five pounds, knock her off her feet and to the side of the SUV which screeches past, clipping her ankle and spinning her out of my reach.
Seconds later, I’m on my feet looking for the registration, but the SUV is already round the corner and out of sight. I can still hear the engine disappearing up Goodlette-Frank and grin at the irony that right about then it will be passing the Sheriff’s office.
Turning my attention to the woman, she’s already sitting up but holding her ankle and obviously in pain. I unclip my cell and dial 911.