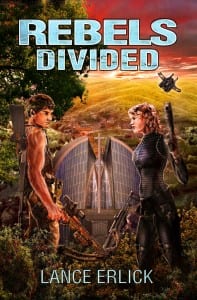 Rebels Divided is part of the Rebel series, but also works well as a standalone story.

After the Second American Civil War, the nation divides into two ‘utopias’. The Federal Union controls most of the country. It enforces harmony and an all-female society with the help of EggFusion Fertilization and Female Mechanized Warriors based near Knoxville. The male-dominated Appalachian Outland promotes rugged individualism, but Thane Edwards holds a monopoly of power. He enforces this with his Rangers, loosely modeled on the legendary Texas Rangers. The Union’s Tenn-tucky governor and the Outland warlord conclude a secret deal.

Geo (19) is a rugged frontiersman who hungers to see more of the world than the impoverished Outland glen where he and his pa hide from local Rangers. To prove himself, Geo fights Union mechs and Outland Rangers to protect friends, neighbors, and refugees fleeing the Federal Union. Unbeknownst to him, the Outland warlord sees Geo’s pa as a threat that must be eliminated. Annabelle (19) is a tough yet fragile tomboy who lost her parents at age three to mech warriors. She develops a rebellious streak against her Federal Union, which forced her to become a mech warrior. Now, Edwards will stop at nothing to have her as his bride to provide him heirs.

Pursued by their own and opposing military forces, Geo and Annabelle must wrestle with mutual mistrust as sworn enemies. Yet, only together can they confront Edwards to rescue her sister and gain justice for Geo’s pa’s murder.

What Advice Would You Give Aspiring Writers?
Write what you are passionate about. I’ve heard said we should write what we know. I think it is more important to write what you want to know more about and research to fill in the blanks. That often carries more of the passion.

Author Bio:
Lance Erlick grew up in various parts of the United States and Europe. He took to stories as his anchor and was inspired by his father’s engineering work on cutting-edge aerospace projects to look to the future. He writes speculative fiction, science fiction, dystopian and young adult and likes to explore the future implications of social and technological trends.