You are here: Home / Fiction / Psychiatryst by B. Michael Fett @bmichaelfett

Gruesome murders are mounting bringing five lives together; two of them killers, two of them cops and one a psychiatrist. The killers are out to kill again and the cops are bound by oath to stop them. The psychiatrist, Laura Hartwig, is caught in the middle. She’s heard the confessions; she knows details she shouldn’t, but her involvement could expose her darkest secret. She’s torn between right and wrong, but when push comes to shove, Dr. Hartwig must protect what is closest to her heart even if it’s a killer. 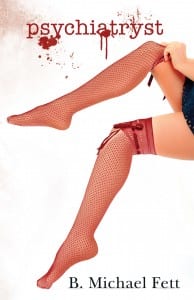 How is Writing In Your Genre Different from Others?
My genre is different because there is a certain level of research involved. Events have to be believable unlike the fantasy genre where an author can simply make it up as he or she moves along. Harry Potter never got backed into a corner because he always suddenly had new yet unrevealed powers. Jack Ryan can’t just wave a wand and make it all go away. Writing fiction yet believable fiction sometimes takes more than just imagination.

What Advice Would You Give Aspiring Writers?
Don’t fall into the cracks of the myth that you have to find a major publisher or an agent to get your work out there. Write it and they will come. Fifty Shades? Blair Witch Project?

Author Bio:
Picture
B. MICHAEL FETT was born in Longmont, Colorado. He was raised in Camanche, Iowa and graduated from Camanche High School in 1985. Upon graduating, he joined the United States Marine Corps and became a helicopter mechanic eventually assigned to HMX-1, the Presidential Support Squadron. Earning an Honorable Discharge, he was released from active duty in 1992.
B. MICHAEL FETT was involved in the sport of bodybuilding at a very early age claiming to have received his first weight set in the third grade! He began to compete as a teenager finally winning his division at the Mr. Teenage Iowa in 1985. He went on to compete for the Marine Corps winning his division at the Armed Forces Championships in 1991. Fett continued to compete after his release from active duty earning the title of two-time nationally qualified, but was forced into early retirement after back to back knee surgeries. He began his aviation career outside of the military as a mechanic for a major airline based in Washington D.C. He soon realized that this wasn’t the career he wanted so in 1999, he obtained his private pilot license and began the long road to becoming a commercial airline pilot. He has piloted some of the world’s most notable celebrities from Paris Hilton and Dave Chappelle to Condoleeza Rice and Danny Devito. Mr. Fett presently lives in Milwaukee, Wisconsin and works for a major airline based out of Chicago, Illinois.