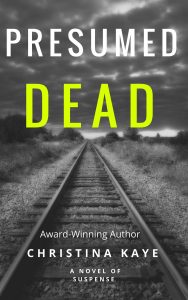 Reggie Foster has done an amazing job of blending into the small town of Irvine, Kentucky. For five years, she has laid down roots, started a new career, and even made a few friends. Even more impressive? She’s hiding in plain sight and no one even remotely suspects she’s not who she says she is.

When a six-year-old girl goes missing and she begins having visions that might help find her, Reggie has no choice but to take the risk of telling the police only one of her many secrets…that she’s a psychic. She gambles with her freedom when she turns to Detective Jack Benton, a former big-city cop trying to escape a traumatic past, and offers to help with the investigation.

Reggie finally convinces Detective Benton to give her a chance. With the help of Warren Harvey, a search and rescue organizer battling his own personal demons, the three form a rather unorthodox task force.

Somehow Reggie must help the team find the missing girl while keeping the others from discovering the truth about her past.

What Inspired You to Write Your Book?
I was visiting my family's hometown, which is very tiny, and I began wondering if there were people hiding in plain sight there…people with dark secrets they wanted no one to know about. Reggie was born. Then I just started brainstorming plot twists from there and Presumed Dead was born!

How Did You Come up With Your Characters?
I used to watch a lot of the TV show, Medium. One day I was watching a rerun while I was brainstorming this book and the notion of making my main character a psychic just hit me and I couldn't shake the idea. Thus, my main character with a dark, secret past became Reggie Foster, a secret psychic.