You are here: Home / Fiction / Opium Warfare by Justin Bienvenue 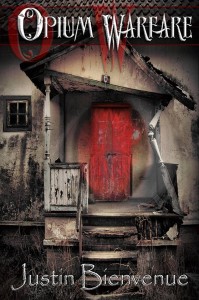 It’s 1920. The city of Shanghai has been invaded by the drug trade. The drug trafficking and usage of opium have taken the city by storm. While the looks of the city seem calm, deep within there is a secret and nobody realizes that the small hidden drug world is about to get bigger..much bigger. The underground world that was once hush- hush is now slowly making it’s way to the surface to corrupt the public. However only a few are aware of it, for the rest it shall cause an uproar making some frantic and some in awe. Soon the drug is seen all around the city and it seems that getting one’s hands on it has become a problem so much so that it causes an all out epidemic. One that no one will see coming or seemingly be able to stop..

One of the few people aware of all this is Ryu Tsang, a local dock worker who grew up admiring the city for all it’s glamour. When strange things start happening Ryu takes notice. While at first he brushes off the first few encounters he can’t help but shake the fact that something bigger is unfolding. Shin Shaojin believes the city will be better off embracing such change. He has a vision of Shanghai’s future. One that involves his business to bloom and offer endless possibilities to all that are accepting. Will the city overcome the dark cloud that is the drug trade or will it be taken in and become the change that Shin Shaojin believes it can be?

What Inspired You to Write Your Book?
After the title pretty much just popped into my head one day I knew i wanted to do something with it. I wanted to expand it so I decided to write a book but where would the inspiration come from I didn’t know until I remembered where opium was most prominent, China. I then decided that Shanghai would be the main place and after looking into Shanghai and Opium the ideas just came at me all at once. It was then that I realized that I didn’t need to create a world but rather tap into the world that already was and use my many many ideas and bring them together to create a beautiful yet crime driven and at one time all too real novel.

How Did You Come up With Your Characters?
The characters are all simple yet they also have their own unique traits that make them a bit complicated. I wanted the main character to be a family oriented type seeing as the setting was from China and most Chinese tend to take family very seriously. Between that and the fact that I wanted him to be good through and through I based him off an everyday good guy but also gave him his own unique traits, interests and style along with giving him deep curiosity which can be seen throughout the book. I came up with the antagonist by making him the exact opposite of the protagonist and basing him off an ego driven businessmen and businessmen from the twenties. The rest of the characters I sort of just came up with and improvised as I went along.

Book Sample
He was a dragon amongst swans as he was sitting Indian style on a luxurious oriental rug in his den. Though he usually wore two piece suits of the finest material outside, inside, he wore the most elegant silk robes. This was a typical day in the life of one of China’s biggest businessmen, Shin Shaojin. After his meditation in the den, he grabbed a glass of his favorite Baijiu (wine), Kaoliang. Sometimes, he drank it straight up, but today he drank Chajiu, a tea liquor with Kaoliang flavoring mixed with hawthorn berries. As strong as the liquor was, he usually held it down. Shin Shaojin was the type of guy you wanted to either be or associate yourself with. He was Henry Ford and John D. Rockefeller on steroids. Sure, he was stuck up just like any rich snob was, but only to those whom he thought of as a threat to him. For the most part, Shin Shaojin respected his fellow men in China, but if you crossed him, you would pay handsomely for it.
As Shin sat back and tried to relax, the two men Ryu saw at the market and at Chao’s appeared and interrupted his quiet time. Shin only just positioned himself and closed his eyes as he heard footsteps of the men approaching him.
“You better have a good reason for interrupting my meditation time,” he said in a vulgar tone.
Both men bowed down to him before speaking.
“Forgive us Mr. Shaojin, we have just returned from visiting Chao at his deli to collect your money.”
“Did he give you all of it?”
“Yes, sir, and he also said that next time, he may be a bit late with the payment, but we told him that it’s not our problem.”
Shaojin snickered, “May be a bit late…what an ignorant fool. We should be paying him for him allowing us to use his space, but then again, who is he and who am I?”
The two men did not know whether or not to respond.
“Because he is the indebted mediocre deli worker on his last whim and I am the striving and influential man keeping his business alive.”
“We’d be more than happy to pay him another visit, sir.”
“Very good gentlemen, very good. I’m sure you will and I may even join you myself to show this stupid old fool that I mean business. Was there anything else?”
“Well, there was this young guy at Chao’s who said he knew me. I kept telling him he was mistaken.”