You are here: Home / Fiction / Mystery/Suspense / One Two Buckle My Shoe by E J Lamprey @elegsabiff 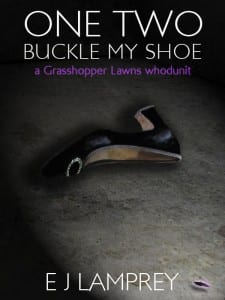 “So I was able to help after all?” Edge asked pointedly and Kirsty grinned at her over her cup of tea.

“Iain now calls you Jessica Fletcher, and he said I can tell you things within reason, and we can both sit back and wait for you to solve our cases. And that he’ll be consulting you on one or two others, but I think he was joking.”

“All very well but we haven’t solved this one yet.” Edge said briskly. “I was told very emphatically by a policeperson I trust implicitly – well, you – that Mose was definitely not murdered.”

In One Two Buckle My Shoe the police could do with a little inside help at Grasshopper Lawns to solve the murder of an unpopular resident. Fortunately Sergeant Kirsty Cameron’s slightly eccentric Aunt Edge is right on the spot.

The murder sparks off a train of events, new friends (the vast but charming William and the sardonic Donald), and a series of light-hearted whodunits which will, if the supply of coffee holds out, make it all the way to the end of the nursery rhyme.

In One Two Buckle My Shoe, murder isn’t always straightforward and clues can be elusive. Just finding out who exactly got murdered was the first challenge.

The residents at Grasshopper Lawns were closely interested, because the murderer could be among them, but hadn’t any intention of interfering in the solving of the case. Piecing together scraps of information was intriguing, though. And they did keep coming across facts that no-one had given to the police –

This is the first in the quite light-hearted murder series based in a rather unusual retirement village in Scotland. They’re novellas, easy reading, and available on kindle through Amazon

How is Writing In Your Genre Different from Others?
With a whodunit you have to solve the murder and then work backwards, building in the clues and the red herrings and pulling together all the threads. If it’s done right, the reader should be solving the murder(s) pretty much neck-and-neck with the characters, so no clues are held back and the reader at all times knows as much as the characters do, has heard what they’ve heard, and can try to beat them to the final conclusion. It makes them the most fun of all to write, but the hardest to get right!

What Advice Would You Give Aspiring Writers?
You wrote the book, but unless you want to keep it just for your own reading pleasure, you’ve barely started. Put it aside for a month, then edit, cut, add, edit, cut, add, edit again. Then give the book to at least 3 beta readers, (friends, or fellow authors, join a writing group or find an appraiser in your genre) and listen to their feedback so that you can cut, add and edit again. It can be shocking to find that what was so obvious to you wasn’t clear to anyone else, and that you still have to translate the clear image in your head onto the page. When you think you’ve nailed it, find a reliable editor to polish the book up – nobody can self-edit to perfection, the brain simply knows the book too well and fills in the gaps.

Author Bio:
Elizabeth Lamprey lives in Scotland, on the Firth of the Forth, within easy distance of Edinburgh. She loves Scotland but accepts that with a mere thirteen years residence she is still considered a tourist, albeit a tenacious one.

Originally from South Africa, she has been variously a book reviewer on a city paper, a columnist in a national magazine, a copy-editor and critiquer, a commercial blogger and a reporter on a country newspaper, alongside more conventional, better-paid, jobs.

Writing a series of cheerful whodunits set in a Scottish retirement village is her favourite occupation.

What Inspired You to Write Your Book?
My gregarious Scottish mother was endlessly fascinated by her neighbours at her retirement village in Johannesburg, and often regretted she’d put off moving there for so long. After her death I coped with the gap by writing her into a story with even more eccentric neighbours, a lovely Scottish flirt, a fellow opera fan and a generic best friend, throwing in a murder as a friendship accelerator. This isn’t that book, but a few years down the line the series was born from it, a celebration of good times to come.