You are here: Home / Fiction / Mystery/Suspense / Murder in the Boonies by Maggie Pill 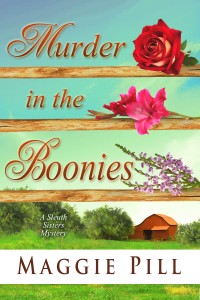 When the people renting the Sleuth Sisters’ family farm move out unexpectedly, Retta suspects that at least some of them didn’t go voluntarily. As the sisters deal with the menagerie of animals left behind–some usual, some exotic- things happen that range from puzzling to downright dangerous. What was Ben McAdams into, and did his odd views of society lead to murder? Trying to answer those questions leads Barb, Faye, and Retta to a desperate chase on Michigan’s Mackinac Island as they work together to stop a plot meant to lead to many deaths, including their own.

What Inspired You to Write Your Book?
Sisters. I have two good ones, but even so, we see life differently because of our experiences and personalities. Most of us love our sisters, but we also know them too well to ever believe they’re perfect. That doesn’t mean sisters can’t work together when necessary, but it also doesn’t mean there won’t be friction when they do!
This is the 3rd book of the Sleuth Sisters series, and it just gets more fun to write. My sisters even give me ideas on how Barb, Faye, and Retta can get into more trouble!
People often ask which sister is me, and I have to say there’s a little of me in each of them. But the Grammar Ninja in Barb? That’s me all the way.

How Did You Come up With Your Characters?
To see how sisters might be alike is easy: they grow up in the same home, town, and social group. To see how they’re different is easy too: lives go in different directions. Barb has been a professional all her adult life, and she’s lived away from little Allport and its concerns. Faye has concentrated on family, and she sees the detective agency as a chance to help people. Retta just wants to have fun, and if sticking her nose in other people’s business is a way to do that, she’s ready–although she does have an appointment to get her nails done later.

Buy Murder in the Boonies On Amazon