You are here: Home / Fiction / MESSAGES 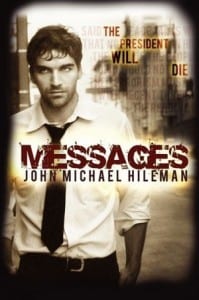 David Chance can see messages in the sea of words around him, messages that warn him of future events.

Words are everywhere– on labels, magazines, sign posts, t-shirts– everywhere. And as much as David Chance would like to hide from them, he can’t. Words keep leaping off objects around him, forming messages in his mind. But how is this possible? Has his brain suddenly taken an evolutionary leap forward, or are the mysterious messages proof of divine intervention?

Driven to answer a question he’d long ago abandoned, and stalked by the killer he’s trying to stop, David risks everything to follow the messages to a dirty bomb set to go off in the heart of Boston. But can he trust the author of the messages to protect him from a terrorist who seems to know his every move.

After serving in the U.S. Army, John Michael Hileman started a small 3D animation company. From there he was hired as production director for a television station, where he oversaw the production of three semi-national television programs. In his spare time, while being a faithful husband and father, he authored his first book, VRIN: ten mortal gods, which later placed in the top four of a national writing competition. Encouraged by this, John went on to write the #1 best selling supernatural thriller MESSAGES, and his latest release UNSEEN. The rest is yet to be written.