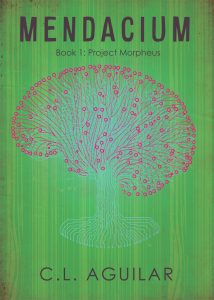 In a world where fathers are not only absent, but often ridiculed, it is refreshing to find a man who will stand up, despite his failures, to protect and save his children. Such is the case with John Randall, a broken man trying to put the pieces of his shattered family back together.

With John’s marriage torn apart by his own self-indulgence, his teenage son, Matthew, is left to find refuge in the online world of fantasy – his mind becoming so entangled in the duality between what is real and what is fiction that his soul becomes united with delusion and falsehood.

When Matthew becomes mentally debilitated by a suspicious car accident, his seemingly estranged father does anything necessary to pull him out of an evilly induced coma, even to the point of participating in an experimental procedure where he will have to go beyond the comforts of his worldview to sever the fantasies that imprison his son. Though determined to liberate Matthew, John will discover there are supremely darker forces than he realized pushing against his success.

What Inspired You to Write Your Book?
As I was seeing my teenage son spend hours playing his XBOX, I was reminded about all the time I spent indulging the same practice. Pondering the correlation between father and son, a story about generations began to foster in my mind, one of breaking the curse of addiction and releasing the blessing of true connection.

How Did You Come up With Your Characters?
The main character John is fashioned around me and my struggles with past addictions, while the main character's ex-wife, Naomi, is inspired by the virtue of my one and hopefully only wife. Their son Matthew is also inspired by our real world son and thinking about the influence of fantasy on his mind.

Book Sample
Minutes later, they entered the inn. It was bustling with a wide variety of people. Most of the patrons who fre- quented the tavern were farmers and lumberjacks. There were a few stonemasons and one blacksmith living in the town who visited the bar on occasion. A few wandering merchants would stop by in the midst of their treks to buy and sell their wares, so the town obviously had money. Despite its apparent affluence, the people prided themselves on their simplicity. There were no complicated politics or complicated relationships. These people appreciated their work, and they appreciated their after-hours leisure even more. They were the type of people who would work until the sun went down, and when the sun finally did set, the Golden Fodder Inn was obviously the place where everyone congregated. The inn acted as a meeting place filled with alcoholics ready to pay their tributes for another round of worship.