You are here: Home / Fiction / Living Sacrifices: Book One by Renee Alexander 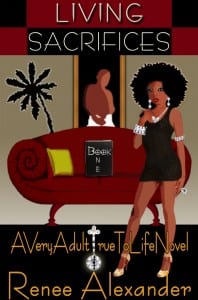 BASED ON ACTUAL EVENTS: The teen daughter of a wealthy and incestuous Masonic clan falls victim to Celebrity Sexual Deviants after partnering with Evil to punish a hoodoo-worshiping basketball star.

If you thought Celebrity Sexual Deviants and Catholic Priests were the only ones with issues, think again. Shari Dawson is a revenge-obsessed Drama Queen for whom sex is synonymous with power. Shari’s sexcapades will introduce you to a host of sacrilegious up-and-comers.

Four of the fifty lost souls include Mrs. Mayfair, an aging trophy housewife whose infatuation with a teen boy is equally sad and sick. You’ll meet Trevor Culley, an aspiring singer who still plays with girls. Rub shoulders with Karl Landon, actor wannabe and a highly skilled lover, whose passion for obedience can only be described as weird. You won’t easily forget Malak Allen, a churchgoing politician hopeful whose lust for very kinky sex leads to a bizarre assault.

Indeed, Shari learns the truth behind celebrity crimes and indiscretions the hard way. And once you partake in the sextracurricular rituals of these future icons, you’ll start questioning the motives of your own friends and neighbors.

How is Writing In Your Genre Different from Others?
Experimental fiction deliberately breaks established writing conventions. Everything I learned in college had to be unlearned in order for me to make this book work. LIVING SACRIFICES: BOOK ONE is a combination of horror, paranormal, erotica, occult, coming of age, Christian fiction and New Age.

What Advice Would You Give Aspiring Writers?
The advice I have for aspiring writers is to learn about your self-publishing options. Become your own publisher, purchase your own ISBN, and maintain control of your copyright.

Author Bio:
Renee Alexander is a survivor of Childhood Ritual Abuse. Her celebrity-connected family’s longstanding affiliation with occult circles exposed young ReneeA to Hitler Worship, emotional abuse, animal cruelty, assault, and other trauma that shattered her main personality into five. During adult therapy, ReneeA discovered an entire book within a set of diaries dating back to the ninth grade. Her true-to-life series “Living Sacrifices” explores family dysfunction, sexual deviance and spirituality. Immersing herself in school work quieted “the voices” when nothing else could. ReneeA has earned degrees in Mental Health Studies, Liberal Arts, Information Systems, and General Business. Born and raised in the Washington DC suburbs, the divorced and continuously healing author now lives in sunny Southern California.

What Inspired You to Write Your Book?
LIVING SACRIFICES: BOOK TWO is my latest novel, and is the sequel to LIVING SACRIFICES: BOOK ONE. The series takes a peek at the teenage lives of budding celebrities. Before the Internet, word of mouth is how celebrity secrets graduated to gossip. Many celebrities, some from my own family, lived in the DC area during the sixties, seventies, eighties and nineties. The books were written to dispel the myth that every kid turned actor, politician, business leader, or religious icon lived an idyllic childhood. Some were the subject of ritual abuse with the goal of traumatizing them into celebrityhood.