You are here: Home / Children and Young Adult Books / Karmin by Chance McGuire 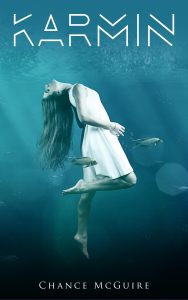 High school is hard enough as it is–without adding in the demonic paranormal tendencies latched to Karmin Black–and now, it’s even harder considering her mother has moved them from their home town of Burlington Junction, Missouri to to the big city of Manhattan, Kansas.

Documents are uncovered in the move, revealing a secret Karmin never saw coming. She has no friends. She has no one to trust, not even herself. At least, she doesn’t until Connor comes along. Conrad Moore, the priest’s son, the so sweet and gentle boy with a demon of his own.

Here and there, Karmin slips into a false reality. She can’t stop it from happening, and in these visions–daydreams, as Karmin calls them–she receives a glimpse of a soon to happen, awful catastrophe. She’ll stop at nothing to save the very people who probably wouldn’t do the same for her.

What Inspired You to Write Your Book?
My book was inspired by other works I’d read and by a story I once heard as a young child; it’s stuck with me ever since.

How Did You Come up With Your Characters?
Karmin came to me in a dream, a blonde haired, average girl, with every day looks. Her personality has bits and pieces of both me and my best friend.