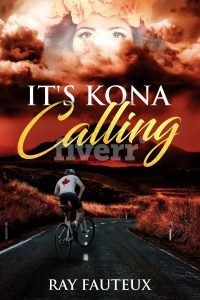 It’s the early 1980’s and middle-age is not being kind to Sam. He’s out of shape, overweight, and smokes and drinks too much. He’s divorced and spends most of his spare time living his life vicariously through the athletes he watches on Wide World of Sports, his favorite T.V. show. Then one day he stumbles onto the telecast of a race taking place in Kona, Hawaii. The race is called the Ironman Triathlon and he’s never even heard of a triathlon before. He’s mesmerized as he watches people crossing the finish line after swimming 2.4 miles, biking 112 miles, and running a 26.2 mile marathon all in the same day. Many of them don’t look like muscular, super-fit athletes. They seemed like ordinary people doing something extraordinary.

For days after, Sam is haunted by what he witnessed. Some mysterious force is calling to him. He doesn’t realize it’s the Iron Gods. The same Gods who haunt the torrid, windswept Queen K. Highway where most of the race takes place. They won’t leave him alone. Finally he decides he just has to find a way to cross that distant finish line. He can’t swim a stroke, and hasn’t run or been on a bike since he was a kid. He doesn’t care. He quits smoking and drinking, loses weight, and commits himself to becoming fitter. With the help of his teenage daughter Emma, he throws himself into swimming, biking, and running. It takes two years for Sam to make it to Kona and his date with destiny.

The day he arrives at the Kona airport he meets Morgan. Morgan is a fiery teenager who also heard the mysterious call of the Iron Gods. She arrives with nothing but a bike, an old helmet, and a backpack to take on what was at the time, the most challenging endurance race in the world. Sam is in awe of her courage and obvious high level of fitness. When she calls out in hopes of finding someone to share a taxi into town, Sam doesn’t hesitate. She’s only a few years older than his daughter Emma and he instinctively feels the urge to help her.

Sam is there just trying to survive and Morgan is there to beat as many people as she can across the finish line. This is the story of their unlikely alliance. This is a story of the power of the human spirit. Long after the body says no more, something deep inside keeps the flame of hope alive. This is a story of Sam finding his true self, and becoming more than he ever thought possible.

What Inspired You to Write Your Book?
Actually, this is a fiction book based on fact. It's Kona Calling is based on fact because I actually took part in the race and crossed the finish line of Ironman Hawaii 1984. Much like Sam, I had never heard of a triathlon and had to learn how to swim in order to even consider going to Kona. That one day in October of 1984 when I crossed the finish line transformed my life. I've wanted to write this book for a long time because I wanted to motivate and inspire others to find their best selves. I started out by writing six non-fiction books. This is my first fiction book and the first time I actually had to bring fictional characters to life.

How Did You Come up With Your Characters?
It was important to me to somehow include men and women of differing ages in the story. I wanted to create the characters in such a way that they could be anyone. I chose a teenager and someone middle-aged for that reason. I chose the name Sam because Sam could be a male or female name. I chose the name Morgan for the same reason. So really, anyone reading the book, from a teenager to an older adult, male or female, would be able to imagine themselves in the place of the main characters in the book.

Book Sample
Sam could see the helicopters hovering a couple of miles ahead. That could only mean one thing. Sure enough, after another 10 minutes of biking, Sam reached the hovering helicopters, and he could see it was the leader of the race running behind the pace car. He was heading back to town and the finish line. He was tall, blonde, tanned, and very fit looking.
Probably a Californian thought Sam.
He was running strong and steady, and there was little doubt that he was going to win the race.

Sam had lived vicariously through star athletes like this for years. He often wondered what it must be like to reach such lofty heights. He had dreamed of doing something great so many times. When he watched high-level athletes on television, he would pretend in his mind that it was him. He was always in awe of them.

Today he wasn't in awe, and it surprised him.
As he passed within feet of this great athlete, he realized why. He wasn't in awe because they were both doing all they could to reach the same finish line. Sam has battling the very same torrid heat and diabolical winds. To realize his goal, he would have to traverse every single inch of the race course that this incredible pro athlete had to. So what if it took him longer?
Does the spirit sing less passionately for those who give all they have to finish, as it does for those who give all they have to win?
No. A thousand times, no.