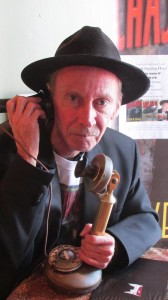 About Steven M. Thomas:
Steven M. Thomas attended Webster College and graduated from Lindenwood College with a BA in Journalism. He played drums in various local bands and was in the thick of things during the punk rock/new wave explosion of the late seventies. Steven wrote articles for various publications as well as songs and lyrics. He is the author of the acclaimed autobiography “I WAS A DRUMMER SHE WAS A DANCER” and the follow up called “Drummer Dancer-The Lyrics.” His latest book is titled CHASE THE RABBIT and is the first in a series of at least five. The second book is RABBITS NEVER DIE. Steven currently resides in Missouri where he is raising his son, Justin.

What inspires you to write?
The first book I published was an autobiography titled “I Was A Drummer She Was A Dancer.” I had to get that out of the way before I could focus on fiction. I am inspired now by my main character, Gretch “Bay” Bayonne, who is a writer in 1932 who gets mixed up in Hollywood, fame and Nazis. I found a character I can really sink my teeth into. And reader feedback is important to me.

Tell us about your writing process.
I know how the story is going to start and end, but it is all in my head. I don’t write a draft or use any plotting devices. I like to surprise myself. So I just sit down and write.

For Fiction Writers: Do you listen (or talk to) to your characters?
I know the characters very well and a great deal of thought goes into who they are before I even start writing. They do speak to me, so to say. They have a life of their own and pretty much write for themselves after that.

What advice would you give other writers?
Make friends with other authors and tap them for advice. I have several mentors who sell a lot of books, so I am fortunate. Build a team of talented people to help you. I have proofreaders, betas, and cover designers and artists besides the normal editors. Don’t let anyone tell you that you can’t do it and don’t spend a lot of money for services.

How did you decide how to publish your books?
Self-publishing is the way to go these days, but it is a lot of work. You have complete control over most everything and you don’t have to share the royalties. The most difficult thing is advertising and promotion. It’s not an easy job, but very fulfilling in the end.

What do you think about the future of book publishing?
It will become easier to self-publish, but the market will continue to be flooded with all sorts of crap. Only those who are very good and work hard will see any results.