You are here: Home / Interviews With Authors / Interview with Author – Patricia Gilliam @PatriciaGilliam 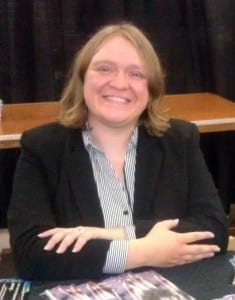 Author Bio:
Sci-fi novelist Patricia Gilliam is the author of The Hannaria Series: Out of the Gray (April 2009), Legacy (November 2009), No Good Deed Goes Unpunished (June 2010), Something Like the Truth (January 2012), and Where the Oasis Blooms (December 2012). Beginning her career as an online content writer, she has written over a thousand nonfiction articles and dozens of short stories since 2006. She is a preferred author on Writing.com and an active member of the Gather.com community, providing free help and resources based on her experiences.

Outside of writing, she is a broadcast camera operator for Redemption Church in the Knoxville, TN area. She and her husband Cory have been married since May 2005. In 2009, they adopted a retired racing greyhound named “Mal” (racing name Lucius Malfoy) and also have two dachshunds named Turk and J.D.

What inspires you to write?
I’ve loved sci-fi books, television shows, and movies ever since I was a kid. My great-aunt worked for NASA, and she sent me addresses of their facilities where I could write them. By the time I was twelve, I had loads of reference material–everything from research about the solar system to how various space craft worked.

Tell us about your writing process.
I started my series off with the idea of treating it like a television show in novel format. This meant putting a lot of effort into the characters and setting–about six months–before the first chapter was even written. I use templates for my characters and settings. (You can find the basic versions of these for free online, and over time I’ve expanded mine to fit my needs.) I also did a lot of short stories as a warm-up. These give you the opportunity to explore characters within a short amount of time. Plus you can bundle them later and/or use them for marketing purposes.

For Fiction Writers: Do you listen (or talk to) to your characters?
Nothing is more fun than having a character doing running commentary while you’re in the middle of something else. 🙂

What advice would you give other writers?
This is a life-long learning process. I follow authors ahead of me and observe what they’re doing to build readership and develop their careers. I try new things with the attitude that they may or may not work–success is awesome, but failure isn’t fatal and can lead you to another new idea. Don’t let fear stop you from following your dream–a big part of the battle is just trying, and a lot of people sadly never get past it. The good news is that part is in your control, and you have choices.

How did you decide how to publish your books?
In my case, it was readers. I had written online for free for about a year–treated it like a hobby–and readers and fellow writers started encouraging me to publish. This was around 2006. Ebooks were still fairly new, and I used a company called Lulu.com to sell a short story bundle in ebook and paperback format. I sold my first copy in Singapore with 24-hours, and the woman who bought it e-mailed me soon after and said she enjoyed it. I was 23 years old and completely stunned.

Since then, I’ve expanded to other opportunities with Kindle, Create Space, nook, and Apple iBooks through self-publishing. Kindle and Create Space (paperbacks) are both owned by Amazon–just go to their home page and find the link that says “Independently Publish Through Us.” Barnes & Noble give you the opportunity to publish to nook with a website called nookpress.com. I still use Lulu.com to distribute to Apple iBooks.

This month, I hit the Bestsellers List on Amazon–peaking at #3 in my category. This was without an agent or major publisher. While I’d still be open to the right traditional deal (research Hugh Howey’s paperback deal with Simon and Schuster as an example), I like making a higher percentage for my work relative to what many traditionally-published author make. It’s a great way to start out and a great way to learn in a period of years rather than decades. Keep in mind that it is a lot of work either direction you take, and it’s not a hard “either/or” decision. Many authors (termed “hybrid” authors) are both traditionally and self-published according to the needs of their project.

What do you think about the future of book publishing?
I’m excited by the possibilities. For anyone who has a creative idea and wants to produce a high-quality product, you have more direct access to your customers compared to the past.

I don’t believe physical books will ever completely go away–even I like having something tangible if it’s a book I enjoy–but ebooks will continue to become a greater share of the market and sales. Authors like me can form teams around us–editors, artists, agents, marketers, etc.–as our careers grow. I know there’s a lot of fear in the traditional side of the industry of job losses, but I hope that the boom on the independent side will not only offset that but create a surplus of opportunities.

What genres do you write?
Sci-fi, action/adventure, thriller, reference